I'm discovering ZX-Calculus, and it seems to be much easier to do computations on circuit that would take much more time with the usual formalism. However, I can't find a nice way to represent measurements (instead of post-selection) and compute the output probabilities. I have the feeling that normalisation and adding variables to a "one-leg" spiders could help, but I'm not yet convinced that it's the good way to go.

And for example, can ZX-calculus deal with "impossible"/not normalisable circuits, like "create a plus state and project it on minus" ?

If you are attempting to understand a surface code lattice surgery computation in terms of a ZX graph this is kind of annoying. You need to be able to figure out which postselections are just shorthands for unitary effects, and which ones are actual measurements of the inputs. The best way that I know of to do that is to perform Gaussian elimination on the table of things that are post-selected by each individual spider. The eliminated table then tells you the external observables that are postselected. Any observable that is input-only or output-only indicates the presence of a measurement. 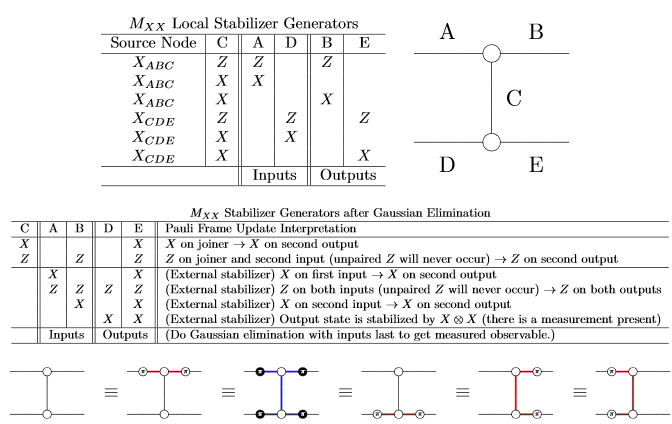 This approach is equivalent to writing two diagrams, one with a red node $0$ and one with a red node $\pi$, and rewrite it until you get simple scalars (that's why you need ZX-Calculus with scalars), and this scalar will be equal to the probability of measuring $0$ or $1$. The addition of variables is just a nice trick to make sure that you just write a single diagram, which is much quicker to write, especially when you add several measurements. This idea is used (introduced?) for example in this paper. Note however that you need to extend the rules a bit, in order to add rules that apply for nodes with variables. But usually it's not very hard to see which rule you need to apply: just see for each rule what happens when $a=0$ and when $a=1$, and here you go!

This approach is so great that now I never write any matrix to check math statements/circuits/...: I just write a small ZX diagram, and I can check what happens very easily!

Sorry, I don't have time right now to give examples, but I'm planning to write a blog post at some point... Will come back when I do so. In the meantime, feel free to ask questions in comments!

15
Graphical Calculus for Quantum Circuits
9
Controlled Hadamard gate in ZX-calculus
2
ZX-Calculus: how to prove this simple equation between two very small circuits
3
What are some applications of the ZX calculus?
4
ZX calculus: What do diamond and loop mean?
5
ZX-Calculus: understand clifford+T/general ZX rules
7
ZX-calculus: pi-copy rule not required for completeness?
1
ZX Calculus -- proving the most basic of identities
1
ZX-calculus: meaning of no horizontal edge