Diagrammatic language for fault-tolerance: I don't understand the difference between preparation correctness and propagation properties

I am learning the diagrammatic language for fault-tolerance which allows to show in an "easy" manner if circuits are fault-tolerant. I first put a reminder of the definitions and then I ask my question.

The following symbol represents an $s$-filter. The Horizontal line behind it represents a logical qubit encoded with physical qubits.

What an $s$ filter does is that it takes the qubit at its input, and project it on the subspace spanned by all codewords impacted by $0,1...$ up to $s$ errors.

Then, I can define a preparation having $s$ faults with the following symbol. 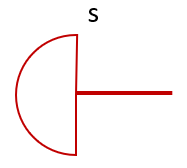 I can define an ideal decoder with the following symbol:

An ideal decoder will (perfectly) measure the syndrome, perform the appropriate correction and then decode the logical qubit (the green line represent an "un-encoded" qubit).

Finally, I define an ideal preparation: 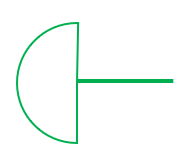 This is basically a preparation having no fault and acting as you see on an un-encoded qubit.

On this lecture (at min 44:31) or this talk at min 35:37, Daniel Gottesman introduces the preparation and correctness properties as follow.

The variable $t$ is the number of errors that the code can correct.

Indeed, "in my own words" $PPP=True$ means "For a preparation having less than $t$ faults, the output state will have less than $t$ errors" (we ask the errors to not propagate "too much" during the preparation).

$PCP=True$ means "If the preparation has less than $t$ faults, a perfect syndrome measurement+recovery would create the exact state that should have been prepared in an ideal world where no faults and errors exist".

But then, if $PPP=True$, a perfect syndrome measurement+recovery will create the exact same that should have been prepared. Because of that shouldn't we have $PPP \Rightarrow PCP$ ?

It seems that those are two completely un-related properties and I don't understand why.

The s-filter projects onto ALL states that are within s of SOME code word. It doesn’t tell you that you’re within s of the specific code word you started with. Even if PPP is true, it doesn’t eliminate the possibility that you try to prepare the logical $|0\rangle$, have s errors during the perpetration, and therefore accidentally prepare a state that is within s of $|1\rangle$. You need to separately enforce that not only does your preparation take you to some state that is close to a code word, it takes you to a state that is close to the code word you wanted to prepare! This is what PCP enforces.

Not the answer you're looking for? Browse other questions tagged error-correction fault-tolerance or ask your own question.

13
What is the difference between "code space", "code word" and "stabilizer code"?
1
Is there an inherent difference in need for error correction between quantum annealing and gate based methods?
4
Accuracy threshold theorem: what is the physical probability of failure exactly
2
I don't understand the lattice splitting procedure for surface code
6
Why do we need to keep of history of $d$ cycle for surface code in order to resist against data *and* measurement errors
2
Magic state distillation with the 15 qubit code. Why is the failure $O(p^2)$ if we include $|+_L\rangle$ preparation and decoding?