I am trying to understand why we need to keep in memory $d$ clock cycles in order to correct efficiently for the surface code where the syndrome qubits are also faulty ($d$ is the code distance).

[edit]: It seems that there is no real "proof" of that. This is something one has to check numerically and it is not obvious from a theoretical perspective (look at the comments below the answer from Craig Gidney)

What I understand: case with perfect syndromes

I summarize my understanding in case it might help potential future readers and in order to help you see where my struggles are exactly.

In the case of perfect syndrome measurement, for a code distance being $d$, we can resist to chain of errors which total weight verifies $|\sum_i E_i| \leq (d-1)/2$.

Here $E_i$ is a $1$-chain inducing errors. And we might have different independent $1$-chains occuring resulting on the total error $E=\sum_i E_i$ on which the condition of maximum weight being $(d-1)/2$ is expressed.

The reason why we can resist to such chain of errors comes from the fact that a logical operator is connecting two rough edges of the surface. Hence its weight is at least $d$. Then, if I assume that correction will apply a minimum weight recovery, and that it "fixes" the syndrome, we have:

1+2 imply that the net effect is then a product of stabilizer: the data is preserved.

Where I struggle: we assume that the syndrome can also be faulty

When the syndrome can be faulty we have to include the time dimension in the reasoning (note: in what follow I assume a bit-flip code so that my surface is $1$-dimensional). The time dimension is vertical while the surface is represented horizontally. Data qubits errors are then horizontal line and syndrome qubit error vertical lines and they will always be written (as before) with the letter $E$. They will be in red colors. Places where a non trivial syndrome is detected (i.e we we are no longer in the $+1$ eigenstate of the associated syndrome) are in green colors. The associated chain will be written with the letter $S$. The boundary of those syndromes are in blue (written with the letter $\partial S$). Below is an image to clarify all this (with examples of errors occuring): 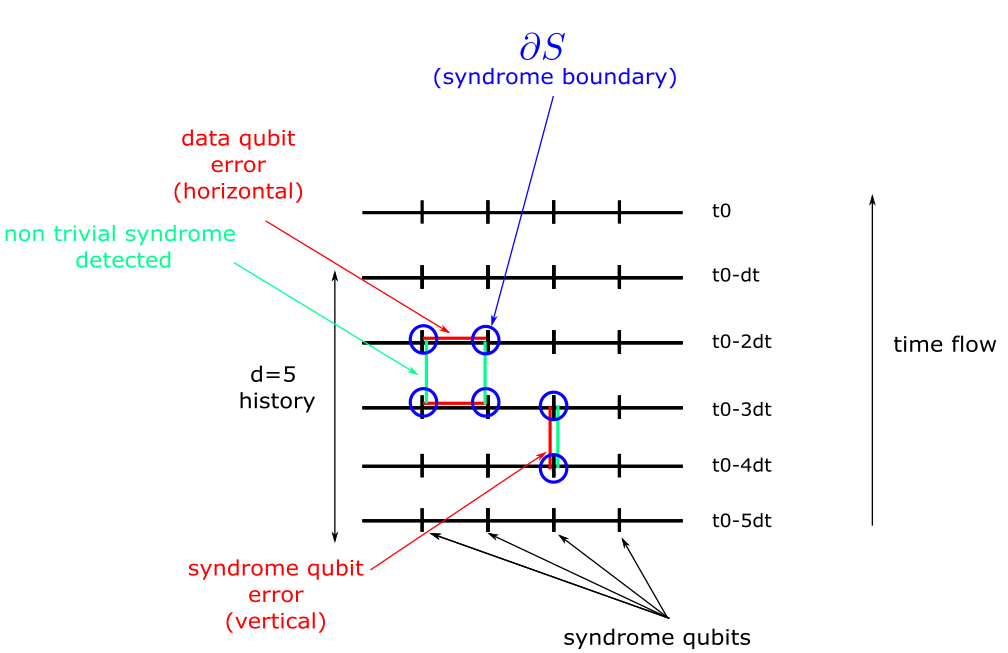 My question: how can we show that we necessarily have to store a history of $d$ cycle in order to be able to resist again error chains which total weight is $|\sum_i E_i| \leq (d-1)/2$? I would ideally be interested by a good pedagogic reference on this. 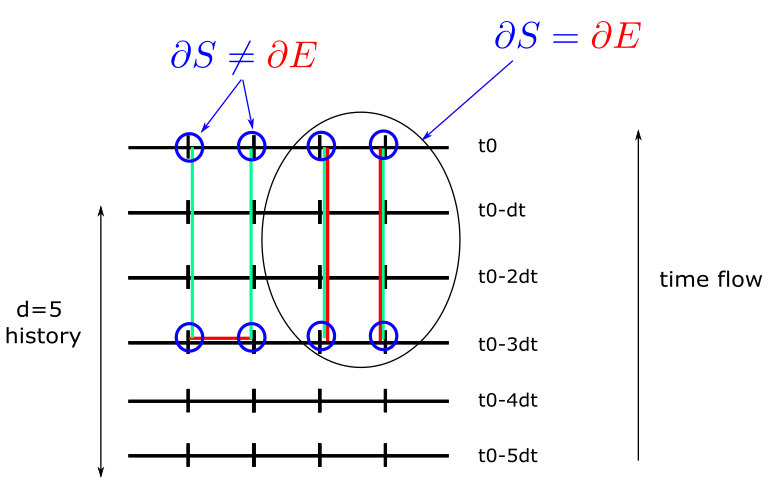 In term of references, what I looked at was this paper. The issue that I have with it latter is that it considers an ideal case with an infinite recording in time. I also looked for instance at ref but it is explained in a very "condensed matter" style and I basically don't get the point. In short: Overall, I looked at various refs on the question but I haven't found a good explanation if you leave the simple case where your time record is "infinite".

As suggested in Craig Gidney answer below, storing data in time might only be necessary if we perform non-trivial logical operations on the lattice. It is also said that errors in time are not dangerous for a quantum memory as they are in the up direction (while logical error are in the left-right direction). However, from my perspective, a time error could indirectly induce a space (i.e left to right) error, and hence be indirectly dangerous. Below is an attempt to show such example. I assume:

Comments on this image:

Of course this example is not necessarily contradictory with the fact we can correct with $O(1)$ in the case of a quantum memory, but it illustrates my confusion. Having less (or equal) than $(d-1)/2$ errors, "live" correction induces a logical error. For this reason the code distance cannot anymore be $d$.

Would it be possible to have an intuitive algorithm that shows how we can correct in the quantum memory case when the syndrome happen to be faulty?

That being said, to me the key problem that jumps out when you have $r < d$ rounds of memory is that a chain of $r$ measurement errors can create a pair of detection events separated by enough time that only one is in memory at a time. And if there's only one in memory, you are forced to match it to a spatial boundary. So suppose these measurement errors are happening next to the center of the patch, and then one additional data error at the future side pushes the future detection event across the center. On the past side you will match to one boundary and on the future side you will match to the other, completing an error chain across the patch (which is a logical error).

Not the answer you're looking for? Browse other questions tagged error-correction resource-request surface-code or ask your own question.

2
when calculating code thresholds, why do we need to take a number of rounds that scales with the code distance?

2
Questions about theorem and proof: "Quantum error correction condition", Thm 10.1 Nielsen & Chuang
3
Why should we measure in X/Z basis for Z/X errors in Steane syndrome extraction?
4
What is a "temporal" or "timelike" logical error in the surface code?
2
Struggle to understand the derivation of the probability of logical error per surface code cycle
0
The meaning of non-destructive measurements in QEC
1
What does "perfect measurement" mean in the context of fault tolerance?
2
Diagrammatic language for fault-tolerance: I don't understand the difference between preparation correctness and propagation properties