Why can the QFT be replaced by Hadamard gates?

I'm studying Shor's Algorithm. In the book, author explains QFT can be replaced by Hadamard gates? Why this process is possible?? 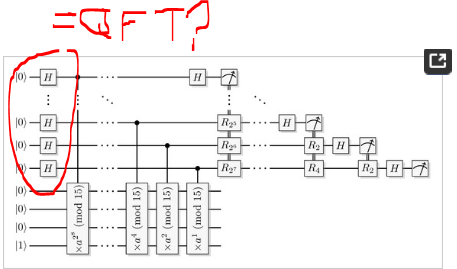 Thank you everybody. This is QPE. I attach part of book!!

The $H$ gates do not replace a Quantum Fourier Transform. The Quantum Phase Estimation algorithm is defined as shown in the picture you linked in your question:

Having an inverse QFT at the end of the circuit does not necessarily mean that there should be a QFT beforehand.

In this case, the inverse QFT is used because it allows us to extract the information we want from a measurement. Go check the maths (on the Wikipedia page for example) to convince yourself that the $H$ gates at the beginning do not replace a QFT.

You can also try to replace the $H$ gates by a QFT, do the maths, and see by yourself what would be the result of the algorithm in this case. It seems to be a good exercise, and hopefully it will convince you that a QFT has nothing to do at the beginning of the Quantum Phase Estimation algorithm (EDIT: it was the worst example possible to convince yourself, see @DaftWullie's answer).

Not the answer you're looking for? Browse other questions tagged quantum-gate quantum-fourier-transform hadamard or ask your own question.

5
Do the probability amplitudes of the superposition state produced by the QFT transform convey useful information?
6
What happens with first phase factor in QFT?
3
2-qubit QFT in IBMQ: controlled phase rotation
1
What is the intuition of using Hadamard gate in quantum fourier transform?
4
Why do multi-bit hadamards expands to what they do?
1
Hadamard/Phase/Hadamard and Inversion about the Mean
2
How to obtain the density matrix using tomography in the real device?
2
N-Qubit Hadamard vs Quantum Fourier Transform