Now, I realize that I don't need the second qubit to be entangled with the others, so I unentangle it to obtain the following: $$ \begin{align} \vert \psi \rangle &= \alpha \vert \color{red}{0}\color{blue}{0} \rangle + \beta \vert \color{red}{1}\color{blue}{1} \rangle \end{align} $$ I don't really care about qubit two anymore. It can be measured to destroy its superposition or even be set to anything else. The point is I unentangle it from the system. Is such thing possible? If yes, what is the mathematics and the physical realization behind this?

In summary: measure the qubit that you want to remove in the $X$-Basis and perform a phase correction if neccessary.

This procedure is standard in entanglement-based quantum computation.

Measuring the second qubit in the $X$ basis you get one of two results, associated with the two eigenstates of $X$, which are: $\newcommand{\ket}[1]{|#1\rangle}\sqrt2\ket\pm\equiv\ket0\pm\ket1$.

This tells you that, if you want to get the state $\alpha\ket{00}+\beta\ket{11}$ on the remaining qubits, you can do it by post-selecting on the outcome $|+\rangle$ when measuring one of the qubits (in your case the second one). By post-selection I mean that you will have the correct state on the two qubits only whenever you measure $\ket+$ on the second one. This can be used in computation by post-selecting the experimental runs in which the second qubit was found to be $\ket+$ (which will be roughly half of them), and discarding the rest.

If you also allow for a local operation be performed on the remaining qubits conditionally on the results of measuring the second one, then you even make this into a deterministic algorithm, by applying a $Z$ gate conditionally to finding $\ket{2_+}$ which as you can check converts $\ket{\psi_-}$ into $\ket{\psi_+}$.

First of all, you cannot describe entanglement with tensor product. Resulting state of $q_0 \otimes q_1 \otimes q_2$ will be

To obtain state $\alpha|000\rangle + \beta|111\rangle$ you have to employ circuit similar to this: 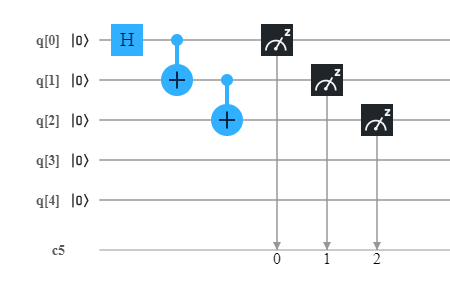 In this case $\alpha = \beta = \frac{1}{\sqrt{2}}$. To change $\alpha$ and $\beta$ you should replace Hadamard gate with for example $U3$ gate to set these constants according to your requirements.

To unentangle second qubit, you should appply inverse operation to the one which created the entanglement. In this case, it was CNOT gate. As inverse to CNOT is CNOT itself, the circuit where qubits $q_0$, $q_1$ and $q_2$ were firstly entangled and then qubit $q_1$ was unentangled is this: 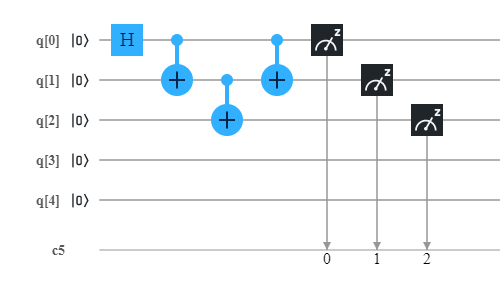 Not the answer you're looking for? Browse other questions tagged quantum-state entanglement circuit-construction measurement or ask your own question.