What does the error rate on the IBMQ website mean？ 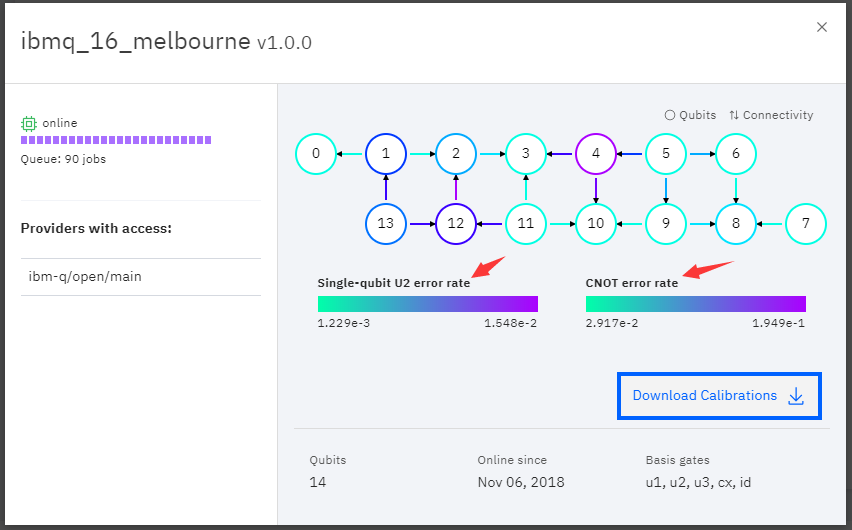 How is the error rate pointed by the arrow defined? How did you get it? thanks!

Readout error: do a bunch (1000's) of experiments preparing the qubit in either the 0 state or the 1 state and then immediately measuring the qubit state after each preparation. Two types of readout errors can occur: prepared 1 --> measured 0, and prepared 0 --> measured 1. The reported readout error is the average of the rate of those two errors (e.g. if the first occurred on 2% of trials and the second occurred on 1% of trials, then the total error rate would be 1.5% or 0.015.

Single-qubit U2 error rate: this is measured using randomized benchmarking (see https://arxiv.org/abs/1109.6887), in which sequences of gates (specifically Clifford gates) are applied with the goal of taking the qubit on a random walk among certain points on the Bloch sphere and returning it to the 0 state it started in. As the number of gates in the sequence is increased, the chance of returning to zero drops exponentially and eventually saturates near 50%. The gate error rate is extracted from the fit to this exponential decay.

2
How can I find the fidelity of the preparation operation $|0\rangle$ of IBMQ?
1
Bernstein-Vazirani IBMQ error due to probably measurements
1
How to get the CNOT error rate between 2 qubits on a given IBMQ Backend?
0
What do the "gate errors rates" mean physically for IBM's quantum computers?
4
IBMQ backends: How can I know the repetition rate and depth limits of real devices?
2
What is the relationship between the (sx) error rate listed in calibration and the angle/amplitude errors calculated using the fitter?
0
How can I simulate the Avg CNOT Error on IBMQ Backends?
0
Error when running a VQE circuit in IBMQ backends
1
Are we using the real-time error information in simulating noise on qasm?