In these lecture notes by Scott Aaronson, the author states the following (towards the end of the document, just before the Linearity section):

There's actually another phenomenon with the same "Goldilocks" flavor, which was observed by Bill Wootters -- and this leads to my third reason why amplitudes should be complex numbers. Let's say we choose a quantum state $$\sum_{i=1}^N \alpha_i |i\rangle$$ uniformly at random (if you're a mathematician, under the Haar measure). And then we measure it, obtaining outcome $\lvert i\rangle$ with probability $|\alpha_i|^2$. The question is, will the resulting probability vector also be distributed uniformly at random in the probability simplex? It turns out that if the amplitudes are complex numbers, then the answer is yes. But if the amplitudes are real numbers or quaternions, then the answer is no! (I used to think this fact was just a curiosity, but now I'm actually using it in a paper I'm working on...)

Numerically, I can see that this seems to be the case. Indeed, using $N=3$ as an example, if I generate random elements in the sphere, and look at the resulting distribution of the squares of the coordinates, I get the picture below on the left, while doing the same with complex coefficients (that is, with random states), I get the one on the right: 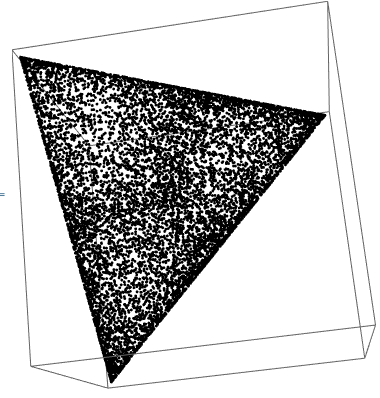 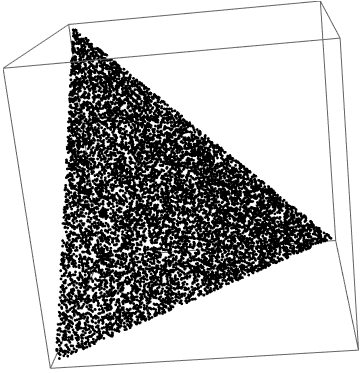 Why is this the case?

We can begin this question by comparing two small cases, a qubit with a "rebit", the latter being a qubit confined to real amplitudes. The set of pure state of a rebit makes a great circle in the Bloch sphere, say a vertical circle. The corresponding measure on the probability interval is given by projecting uniform measure on the circle onto the $z$ axis, i.e., a diameter of the circle. If you draw a picture of this, it leaps out at you that of course it's not uniform, because the circle is parallel to its diameter at the middle, but angled near the poles. If we parametrize the projection interval as $[-1,1]$, which is different from the probability parametrization $[0,1]$ but convenient here, then the projected density is the same as the arc length integrand for a circle, namely it is $\frac{dz}{\pi\sqrt{1-z^2}}$. Just as the geometry suggests, the density goes to infinity at the endpoints.

If you repeat this same thinking for the Bloch sphere of a qubit, then you see a coincidence that has been celebrated for a very long time. Borrowing from spherical coordinates, let $z = \cos \theta$. Then a latitude band at a polar angle of $\theta$ of height $dz$ is tilted to give you its area a factor of $1/(\sin \theta)$, but its radius is $\sin \theta$ rather than 1. The factors cancel! The area of the band is always $2\pi dz$, independent of $\theta$, and the projection onto the $z$ axis is indeed uniform measure on the probability interval. I said that this has been celebrated for a long time, but I didn't say how long. In geometric form, it was first published by Archimedes.

Note that the argument only works for the Bloch sphere surface, i.e., for pure states. For mixed states, the middle of a ball is always fatter than its ends, so uniform measure does not project to uniform measure.

Another case that does not work is a qubit with quaternionic amplitudes, which I guess you could call a "ququbit". The analogue of a Bloch sphere in this case is a 4-sphere in $\mathbb{R}^5$. The beautiful coincidence of Archimedes is now wrecked because the polar regions are too small rather than too large as in the case of a circle. The tilt still gives you a factor of $1/(\sin \theta)$, but a radius of $\sin \theta$ now gives you a factor of $(\sin \theta)^3$ in the 3-dimensional volume, to give you a total answer proportional to $(\sin \theta)^2$ or $(1-z^2)dz$.

You might still wonder how this is going to work for higher-dimensional qudits. There are various ways to argue this. Some of them (like the moment map interpretation in symplectic geometry) are so elegant that they give you a uniform measure coincidence that is vastly more general than the original question; but these arguments tend to pull in more advanced mathematics (like symplectic geometry). One good argument relies on a pair of algorithms, which are valuable tricks in computer software, for generating either a uniformly random point in the unit sphere in $\mathbb{R}^n$ or the regular simplex subtended by the standard basis in $\mathbb{R}^n$.

Not the answer you're looking for? Browse other questions tagged quantum-state mathematics or ask your own question.

5
What is the HOG test and how would it help proving quantum supremacy?
1
What is the probability that measurement finds it in the $|0\rangle$ state?
3
What is the average value of $|c_i\bar c_j|$ for a random state $|\psi\rangle=\sum_i c_i|i\rangle$?
2
How many real-valued coefficients does it take to specify an $n$-qubit state?
3
What separable $\rho$ only admit separable pure decompositions with more than $\mathrm{rank}(\rho)$ terms?
1
Why is the Measurement Result Always 1? (expected to find uniformly random measurement)
4
Is the column vector of a uniformly sampled random unitary matrix a uniformly sampled random state vector?
2
Confusion about the output distribution of Haar random quantum states
2
What are the constraints for the coefficents of the basis states in quantum computing?
1
Find a unitary to prepare state $|0\rangle$ to a specific vector