How does a single-qubit gate affect other qubits? 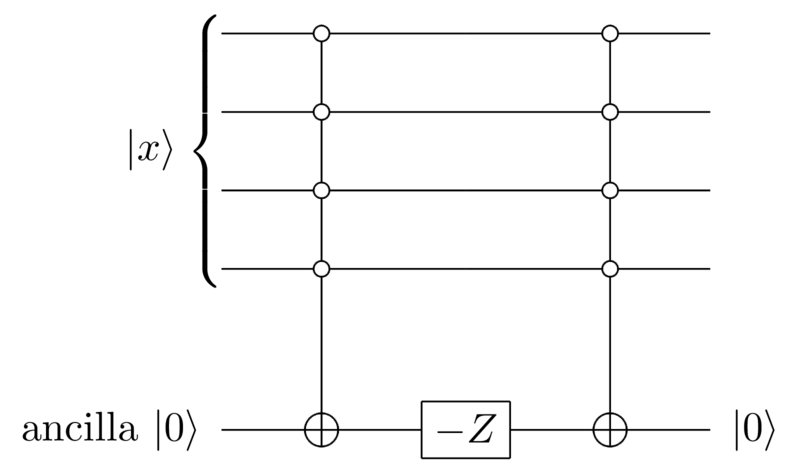 My question is: how can an operation (-Z gate) on the target qubit (the bottom one) affect the control qubits (the top 4 ones)?

I would expect the result of this circuit, when $|x\rangle$ is anything other than $\vert 0000\rangle$, to be $\vert x\rangle(−\vert 0\rangle)$. I understand that, algebraically, $(x)(-y)$ is the same as $-xy$, but intuitively, looking at this circuit, I don't see how those top 4 qubits would be affected by something happening to the bottom qubit. (I know, intuition doesn't have much place in quantum mechanics.) My hunch is that entanglement is at play.

The phase of -1 generated on the ancilla is just a global phase. You can shift it to any qubit without affecting the statistics of the system. Nothing to do with entanglement.

Though your question doesn't ask about it, I'll briefly point out a couple of things. For some reason people seem to believe that state of control qubits should not change when a controlled-$U$ gate is applied. The actual statement is that only the standard basis states $|\{0, 1\}^c\rangle$ ($c$ being the number of control qubits) remain unaffected by controlled-$U$ gates.

If the control qubits are in a state that is different from one of the standard basis states, then theoretically their state could very well be affected. Moreover, as Niel de Beaudrap beautifully illustrates here, you should not attach too much significance to the standard basis!

The phenomenon is known as phase kickback mechanism:

For a detailed explanation, check DaftWullie's answer and the subsequent discussion in the comments.

This is not an attempt to answer the question directly, but might help with the intuition. They key point is that multi-qubit gates can propagate the effect of a single-qubit rotation to other qubits. So, there's the technicality of what effect is propagated that I'll leave to other answers, but just to convince you that it can propagate:

Not the answer you're looking for? Browse other questions tagged entanglement pauli-gates or ask your own question.

16
Why does the "Phase Kickback" mechanism work in the Quantum phase estimation algorithm?

3
Simultaneous eigenstate of commuting observables and their tensor product
4
How can a CNOT gate change the control qbit (e.g. in the Deutsch Oracle problem)?
2
The behaviour of ebits in Entanglement-assisted Quantum Error Correction Codes?
6
How to prepare mixed states on a quantum computer?
0
How does entangle qubits pass single qubit gate?
2
Is this a Bell test?
3
In quantum teleportation, does Bob's qubit depend on Alice's $\alpha$ and $\beta$ coefficients?
4
Role of entanglement in a VQE ansatz for combinatorial problems