If a state is only "close to" an eigenstate of an operator, how many applications of the operator does it take to scramble the state?

However suppose we have another register $|\mu\rangle$, which is only "close to" the eigenstate $|\lambda\rangle$. That is, suppose we have a state $|\mu\rangle$ with $\langle\lambda|\mu\rangle=1-\delta$, for some small $\delta$. I believe repeated applications of $U$ will eventually scramble $|\mu\rangle$ beyond recognition. But, with respect to $\delta$, how quickly does this scrambling take place?

I think this is akin to asking for more spectral properties of $U$. Do we need to know about other eigenvalues of $U$ to answer how big $\delta$ has to be before $\langle\mu|U^r|\mu\rangle\lt 1/3$?

I think this is a natural question that comes about from thinking of the BBBV theorem, but I'm not sure, and my only intuition is that if $U$ is more "connected" then $U^r$ acts rapidly to scramble $|\mu\rangle$.

Note also that the normalisation of $\ket\mu$ implies $$ \sqoverlap\mu\lambda + \sum_k |\langle\mu|\lambda_k\rangle|^2 = 1 $$ The problem here is clearly in how to handle $F_r\in\mathbb C$, which has a pretty nasty behaviour: as a function of $r$, it oscillates wildly in the complex plane. Without any constraint on the possible $\ket{\lambda_k}$ and $\varphi_k$, or on the total dimension of $U$, pretty much any shape is possible (and here I cannot not link this beautiful video by 3Blue1Brown). Just to give a mental picture of what I mean, here are two examples of what you can get when you plot $r\mapsto F_r$ for randomly sampled phases and overlaps, for a six-dimensional $U$: 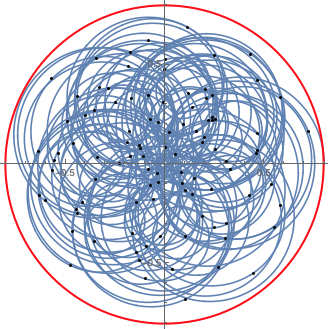 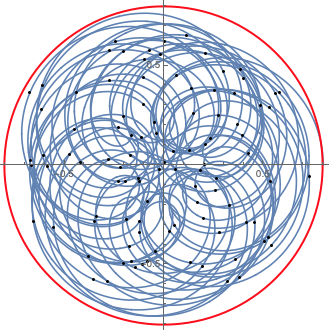 The black dots correspond to the integer values of $r$, the blue line gives the value of $F_r$ for the real values in-between, and the red circle has radius $1-\sqoverlap{\mu}{\lambda}$. Only values of $r$ between $1$ and $100$ are shown. 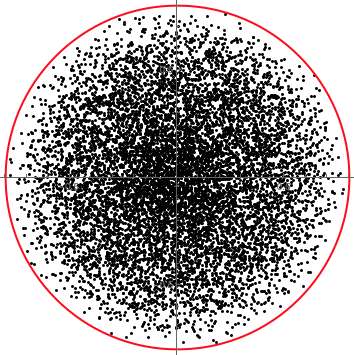 Putting the two cases together, if we plot the possible values of $|\langle\mu|U^r|\mu\rangle|^2$ as a function of $p\equiv\sqoverlap\mu\lambda$ we get the following: 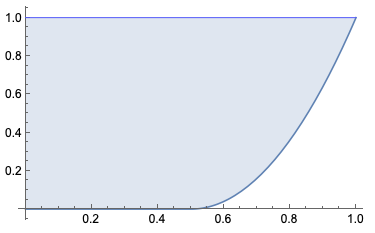 The interesting conclusion is that we can say something about the possible probabilities of a state remaining unchanged after a number of applications of the same unitary $U$, provided that the initial overlap between the state and one of the eigenvectors of $U$ is big enough. Let me remark a few other things here:

Mathematica code to generate the plots of $F_r$:

So the magnitude of $\langle \lambda|U^r|\mu\rangle$ clearly remains constant, irrespective of $r$. Though, it certainly might pick up a phase factor upon each application of $U$.

Not the answer you're looking for? Browse other questions tagged quantum-state mathematics quantum-operation or ask your own question.

14
Can a quantum computer easily determine the mixing time of the Rubik's cube group?
3
Probability of observing search string $\omega$ after $r$ iterations

7
Derive phase damping quantum operation
10
How and why does swap test works?
3
On the probability of preparing of a uniform superposition by performing a controlled-multiplication and post-selecting $0$
4
What is the matrix for a SWAP operation on two qubits?
1
How do I find the state of each qubit at the end of the circuit?
8
Can we simulate the Hamiltonian for the Rubik's Cube with "nth-root of SWAP" gates?