I'm doing a practice assignment where I'm asked to identify specific features of the Grover Search Algorithm's second operator (picture in post, further on "$Us$"), which mirrors the system relative to the $|s\rangle$ vector, defined as the equal-weighted sum of the input parameter's subspace basis vectors (definition below). Naturally, this only concerns the contents of a single iteration.

The operator is defined by the following scheme, which I have, for reference, built in the Quirk QC simulator. 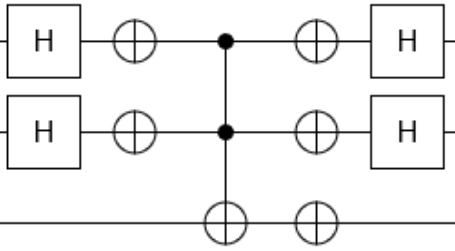 It has the following proposed features (which I need to verify as true or false):

For the first two points, I don't fully grasp the concept of the mapping described here. However, it should be noted that by definition, as far as I understand, the Hadamard transformation on either side of the scheme is to allow the "$Us$" operator to function as a reflection relative to the $|0\rangle^{\otimes n}$ vector.

For (3) and (4), while I have maintained the original wording, I understand the question misnames the CCNOT gate as CNOT - I'm not sure how important this distinction is, other than technically referring to two different types of gates. Both of these are true if only the controlled vector is affected, which I believe to be correct.

I believe (5) is incorrect as, by definition, "$Us$" is a reflection relative to $|s\rangle$. Because of this definition, I believe (6) is correct.

I believe (7) is incorrect because it changes the outcome of the "$Us$" operator.

My understanding of quantum computing is severely limited at the moment, so I'm hoping that I'll be able to gain some much-needed intuition by having my logic here fact-checked.

Browse other questions tagged algorithm quantum-gate grovers-algorithm quirk or ask your own question.