There is a famous paper by Childs, et al, in which it is shown that a quantum algorithm can find the name of the exit node for a certain graph in a way that is exponentially faster than any classical algorithm. This speedup assumes an oracle that tells you which nodes are connected to a given node, as well as a labelling of the nodes that prevents the exit name being deduced without navigating the graph.

In the paper, a random labelling of the nodes is used. However, this will presumably prevent the efficient implementation of an oracle.

Is there any cases for which an efficient oracle is known, that allows for the exponential speedup?

I often wonder if the welded trees considered in the Childs et al. paper have any applicability to questions in algorithmic knot theory such as knot identification/knot canonization. For example, I envision labeling vertices of the welded tree with specific knot diagrams/grid diagrams, and labeling edges with various Reidemeister moves that go from one diagram to another. 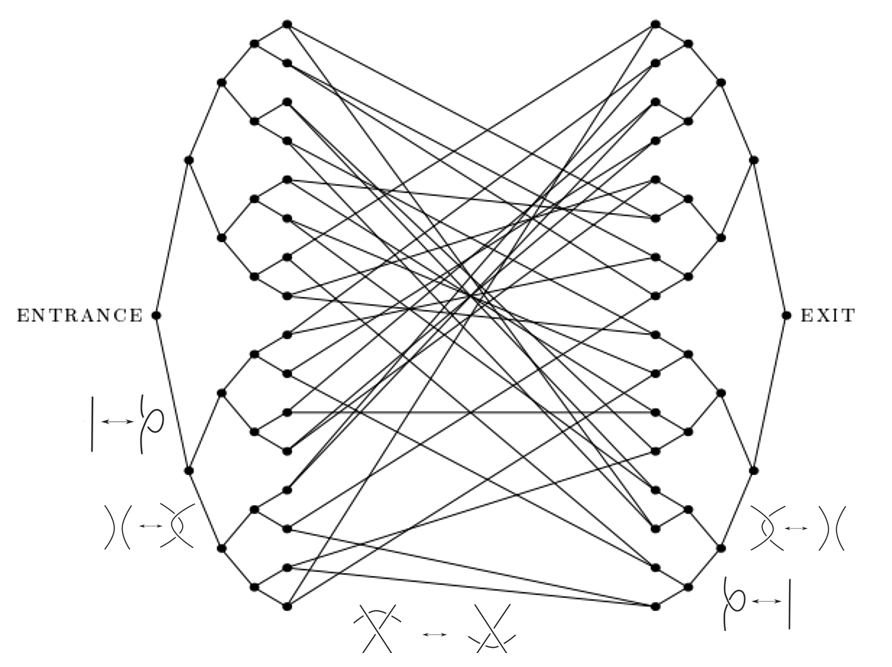 Walking along the tree may be somewhat akin to trying to untangle/untie a complicated knot.

For example, one could identify the $\mathrm{ENTRANCE}$ node with a given knot diagram, and the target $\mathrm{EXIT}$ node with some canonical labeling of the given knot. Each edge corresponds to a Reidemeister move.

I think it's the case that a classical walk to simplify a knot by initially making it more complicated with Type I/II moves often gets stuck doing such Type III moves prior to being able to simplify. Perhaps the quantum walk considered by Childs et al. is more likely to find a simpler canonical knot diagram exponentially faster than a classical walk.

The oracle would be instantiated by labeling a knot diagram/grid diagram (corresponding to the basis states of the Hamiltonian), and providing a list of Reidemeister moves available to such a labeling (corresponding to the off-diagonal elements of the Hamiltonian). Certainly these are classically computable in polynomial time - given a knot diagram, one can enumerate all of the available Reidemeister moves.

As opposed to the tree considered by Childs et al., such a Reidemeister graph is not of degree $2$, nor is it even regular, but I sense that the graph is sufficiently sparse that much of the exponential speedup would carry through.

11
Quantum walk with binary tree
7
How significant are the variants of Grover's Algorithm?
5
Grover's algorithm – DES circuit as oracle?
3
Reversible crypto systems for use in the Grover's algorithm
2
Can Grover's algorithm be used to efficiently find elements in unsorted lists?
3
Relationship of Adiabatic Quantum Computing speedup to Quantum Random Walk hit time
3
What is the relationship between the mixing operators and initial states found in QAOA and Quantum Annealing?
6
How do we know a "quantum function call" is worth the same amount of time as a "classical function call?"
3
What is "Fixed-Point" in the Fixed-Point quantum search?