A basic question on circuits and matrix representation

I have several (rather basic) questions on matrix representation of circuits and I would be very grateful to anyone that could clear up my confusion, thank you in advance.

1) When reading circuit diagrams I know that the input qubit goes in the left hand side. So If we are reading a circuit and it's gates go in the order a,b,c does that mean when we want to write out its matrix representation we multiply the matrices in the order c,a,b . For example if we have a circuit which consists of a swap gate followed by a Hadamard gate on the second qubit , followed by a Hadamard gate on the first qubit , then to calculate it's matrix representation we would have to calculate it in the order $(H_1\otimes I)(I\otimes H_2)Swap$, correct ? (as this reflects the order of application of gates on the qubit state).

or should it be 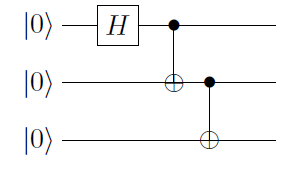 Not the answer you're looking for? Browse other questions tagged circuit-construction matrix-representation or ask your own question.

10
How to construct matrix of regular and “flipped” 2-qubit CNOT?
2
Matrix representation of multiple qubit gates (Hadamard transform on single wire)
3
What is the matrix representation for $n$-qubit gates?
4
Representing qubit swap using linear algebra
3
How to implement a Fredkin gate using Toffoli and CNOTs?
3
General approach for switching control and target qubit
6
How to represent an $n$-qubit circuit in matrix form?
1
Trying to use matrices for Hadamard and Controlled Not gates
0
Quick question about Two-qubit SWAP gate from the Exchange interaction