Understanding the classification of quantum states based on partial transposition: representations of the bipartite density matrix

I'm going through some slides on the PPT/NPT criteria along with Horodecki's paper, and I'm kind of stuck. Let's take this slide: 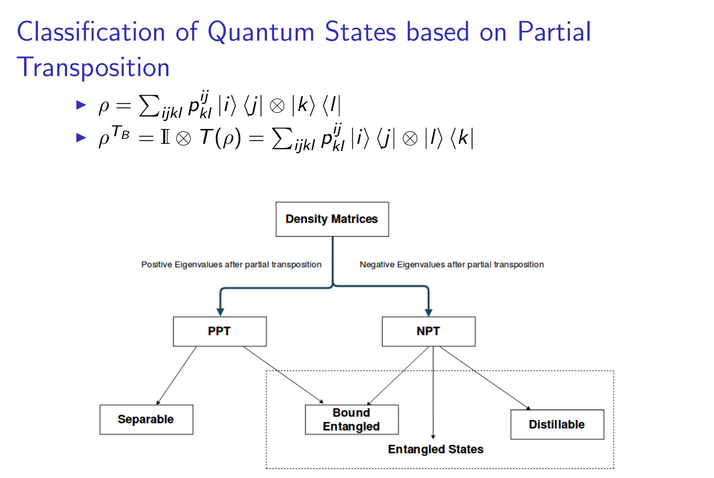 Firstly, why can we write a bipartite density matrix as $\sum_{ijkl}\rho_{kl}^{ij}|i\rangle\langle j|\otimes |k\rangle\langle l|$? What states are the index labels $i, j, k, l$ referring to?

For any orthonormal basis that you pick, call it $|e_i\rangle$, you can write a matrix in terms of that basis as $$ \rho=\sum_{i,j}\rho_{i,j}|e_i\rangle\langle e_j|. $$ When you're talking about a bipartite system, a sensible basis is one based on product states, usually the tensor product between two single-system orthonormal bases. So, you might write $$ |e_i\rangle=|n\rangle|\nu\rangle, $$ splitting the sum over $i$ into two sums, over $n$ and $\nu$. Hence, you can write $$ \rho=\sum_{n,\nu,m,\mu}\rho_{n,\nu,m,\mu}|n\rangle\langle m|\otimes|\nu\rangle\langle\mu|. $$ It just happens that they've chosen to change where the different indices are put.

In fact, this definition of $$ \langle n,\nu|\rho|m,\mu\rangle=\langle n,\mu|\rho^{T_B}|m,\nu\rangle $$ is a general definition. It's not about whether $\rho$ is separable or not. The point is that if it is separable, then $\rho^{T_B}$ is still a valid quantum state. On the other hand, if $\rho$ were not separable, there is no reason why $\rho^{T_B}$ need be a valid quantum state. In particular, it could have negative eigenvalues.

Not the answer you're looking for? Browse other questions tagged entanglement density-matrix partial-transpose or ask your own question.

6
How to show a density matrix is in a pure/mixed state?
5
What's an easy way to determine a local density matrix?
3
Density matrix of a product of Bell states
4
Applying density matrix based criterion to verify separability
2
Understanding the outer products in density matrices
0
Compute the negativity of maximally entangled bipartite states
6
Role of convexity in proof of Monogamy of Bell correlations
3
How do I determine if a given pure two-qubit state is separable?
3
Are the states in the convex decomposition of a density matrix necessarily orthogonal?