Is there a general method of expressing optimization problem as a Hamiltonian?

Let's say, that we have an optimization problem in the form:

Recently I was reading about the adiabatic quantum computing. The Wikipedia says:

Is there some general method of expressing the optimization problem (e.g. as presented above) in the Hamiltonian formalism used in adiabatic quantum computing?

Let's solve the Weighted Maximum Cut problem since this

To understand the problem, we start with an undirected graph of $n$ vertices $\{V\}$, where each vertex $v_i\in V$ has weight $w_i\geq0$ and each edge connecting $v_i$ and $v_j$ has a weight $w_{ij}\geq0$. We then cut the graph into two pieces. The cut need not be straight but must not self-intersect and cannot cut any edge twice. Then we calculate a "payout" $P$ for our cut. The payout is the sum of the weights of the edges we cut through, plus the sum of the weights of the vertices on one side of the cut.$^1$ 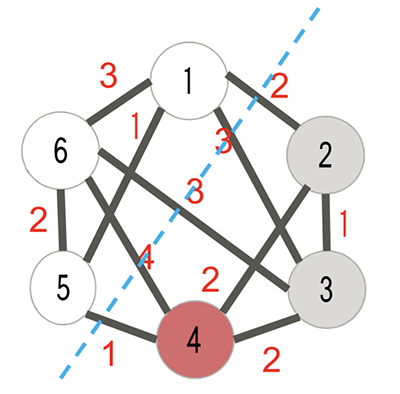 So now our optimization problem is find the string $s$ which maximizes $P(s)$. The idea here is to think of $P(s)$ as a measure of energy of a system and $s$ as the state of the system. This means we can relate $P(s)$ to our Hamiltonian. There's a slight subtly here that we're trying to maximize $P(s)$ but we usually talk about finding the ground state of a Hamiltonian. This isn't an issue but I wanted to point it out - we can instead look at the highest energy excited state (anti-ground state if you will) or use $-P(s)$ as our energy function then work with the ground state like normal. Let's work with the highest excited state and maximize $P$.

We can clean this up even further by multiplying by 2 and removing a constant energy shift (delete the $I$ terms). New Hamiltonian with same eigenstates with eigenvalues scaled and shifted (clearly the maximum energy is unaffected by these transformations)

If you're a condensed matter physicist you'll likely recognize this Hamiltonian as an Ising spin glass. Not really relevant to the problem, but I think it's cool.

So now we have a Hamiltonian whose (anti-)ground state encodes the bit string $s_0$ which maximizes $P(s)$ and solves the problem.

As a starting point $f(t)\propto t$ is often used for simplicity. The minimum $t_f$ determined by the desired accuracy and the spectral gap$^3$. The spectral gap is the minimum energy difference, over all $t$, between the (anti-)ground state and the next energy state. The analysis of the gap is highly non-trivial (see https://arxiv.org/abs/quant-ph/0509162) and determines the complexity/efficiency of the algorithm. An algorithm with 0 gap is not guaranteed to work at all.

Starting in state $|\psi_0\rangle = H^{\otimes n}|0\rangle^{\otimes n}$, evolving according to the above Hamiltonian for time $t_f$ (choosing a suitable $t_f$ is, again, generally highly non-trivial) then measuring in the computational basis should return (with high probability) the string $s=s_0$ which maximizes $P(s)$.

$^1$ This is ambiguous since by symmetry either side will do. We can make this rigorous by, for example, making the cut directed then taking the vertices to the left of the cut when walking along the direction of the cut.

$^2$ I had said in the comment we minimize a cost function, if you like this better just take cost $=-$ payout and minimize cost.

$^3$ I'm sweeping some details about what "slow" means under the rug but can be related to the energy scale of the problem (i.e. multiplying $H$ by a constant will change the speed).

Let's say we want to modify the problem above to require that exactly $5$ vertices are on the "good" side of our cut. Mathematically this is $\sum_i s_i-5=0$. To enforce this, we add a penalty term into our Hamiltonian for solutions that break this constraint. So we add a term like $H_c = -\alpha\left(\sum_i \hat{s}_i -5I\right)^2$ choosing $\alpha$ big enough to ensure a state violating this constraint can't be the highest energy state.

Let's say instead we want to require that there are no more than $5$ vertices on the "good" side of our cut. This, it seems, is rather hard to do. In https://arxiv.org/abs/1702.06248 they state that approximating an inequality constraint to order $k$ requires $\mathcal{O}\left(N^{2k}\right)$ $k$-spin couplings which would require even more overhead to break them down into 2-qubit couplings which is often necessary on a given architecture. Essentially the strategy is to approximate a step function using a $k^\text{th}$ order polynomial. This seems like a terrible way to go about it - but I can't think of better way. This is coming from Troyer in 2017 so it's relatively unlikely, though certainly possible, that a better way is currently known.

The question asks about a general method for encoding an optimization problem into a Hamiltonian. Specifically we want to minimize $f(x)$ subject to a set of constraints. In the section above I discussed adding the constraints to the Hamiltonian. So for a completely general $f(x)$, is there a way to encode it into a Hamiltonian? The general method for this in the literature is to assume we have access to an efficient quantum oracle that implements $f(x)$. We can think of this as having a black box operation (i.e. quantum oracle) $\hat{f}(x)$ such that $\hat{f}(x)|x\rangle=f(x) |x\rangle$. Then we may construct our Hamiltonian as $$ H = \sum_x \hat{f}(x)|x\rangle\langle x| $$ Of course this just pushes the difficult part into finding/constructing $\hat{f}(x)$. In fact, simple counting arguments show that almost all (in the mathematical sense) quantum oracles are exponentially inefficient to implement (see http://www.ar-tiste.com/imp-oracles/imps2.pdf). So while this is a general encoding of an optimization problem into a Hamiltonian - it's not really practical. It would seem to be the case that if you want to encode your optimization problem into a Hamiltonian in a useful way - you'll need to leverage some structure of $f(x)$. My understanding is that the specifics of exactly how to do this and how to do this in the best manner is not fully understood and is the subject of active research.

Not the answer you're looking for? Browse other questions tagged optimization adiabatic-model spin-glasses or ask your own question.