I've been working through the great introduction to quantum computing on Quantum Country. One exercise there is to find a possible quantum gate matrix that is not the $X,I$ or $H$ matrix.

From what I understood, all quantum gates must be $2\times2$, unitary matrices. I have even checked whether $B$ is indeed unitary, and yes, it is.

Why does this gate $B$ not have any useful applications? Or is it just not a valid gate?

That's not the right way to look at it. In quantum mechanics, time evolutions are considered to be unitary and any unitary evolution can be written as a sequence of unitary operators $U_1, U_2, U_3,\ldots$ acting on a quantum state $|\Psi\rangle$. Any single-qubit unitary operation is a $2\times 2$ matrix of the form:

In your case, $a=\frac{i}{\sqrt{2}}$, $b=\frac{1}{\sqrt{2}}$ and $\phi=\pi$. Now, $B$ isn't one of the "popular" quantum gates like the Pauli or the Hadamard, but that doesn't mean it can't be a valid evolution operator! The Hadamard and the Pauli are generally chosen because they have some neat properties; for instance, the Pauli matrices form a basis for all $2\times 2$ Hermitian matrices. For more, read the Wikipedia pages on Hadamard matrix and Pauli matrices. Moreover, note that some gates can be easier to engineer than others; I had written an answer about this before. Also see: Why do we use the standard gate set that we do?.

So for drawing quantum circuits we generally try to choose a universal gate set that's also relatively easy to physically implement. Now any unitary evolution can be replicated with an $\epsilon>0$ precision, with a sufficient number of elementary quantum gates which form a universal set. Niel de Beaudrap also wrote a nice answer on this topic. Perhaps, as an exercise, you can try to write the $B$ gate in terms of the elementary quantum gates listed here?

I suggest playing around with it a bit on Quirk. The Bloch sphere intuition should help: 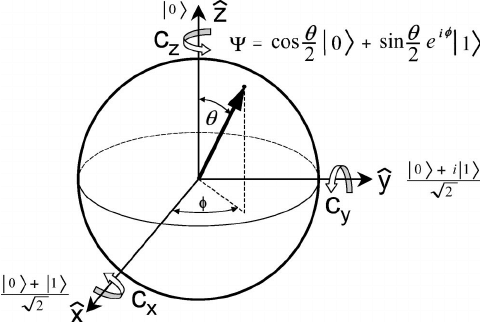 30
How are quantum gates implemented in reality?
11
Is there any online Bloch sphere simulator?
15
Why do we use the standard gate set that we do?
6
How to prove that Z operator rotates points on Bloch sphere about Z axis through 180°?
7
Decomposition of an arbitrary 1-qubit gate into a specific gateset
4
Shorthand notation for the sign flip gate

15
Implementing "Classical AND Gate" and "Classical OR Gate" with a quantum circuit
3
Does the general form of a unitary operator define strict signs for the second column?
4
Non-unitary matrix decomposition as a sum of unitary matrices
7
Constructing a circuit for $C^1(U)$ for rotation operators with TWO single qubit gates and CNOT gate
3
How to perform Quantum Process Tomography for three qubit gates?
0
What is the effect of the reset gate on the matrix form of a gate/circuit?
5
How many quantum gates are needed to prepare an arbitrary state?
2
Does the CX gate always leave the first qubit unchanged and swap the amplitudes of the second one?