I'm going through the Quantum computing for the very curious (Matuschak & Nielsen) tutorial. The example shows a $\operatorname{CNOT}$ gate where the input of the control bit is preceded by a Hadamard gate 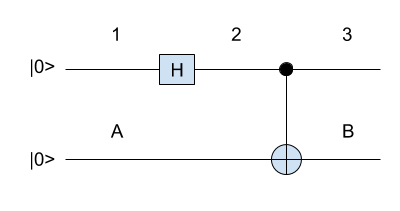 The tutorial then writes:

(I think) I understand:

You should forget about amplitudes as only applying to single qubits. Amplitudes apply to the states of an entire system.

In general, you can do any computation without worrying about the norm because you cannot actually measure the norm of a quantum state.

As a convention, it is often supposed that the norm of a quantum state is $1$. Some authors don't bother to write it though.

Similarly, the quantum gates are unitary matrices. The Hadamard gate $H$ from your question verifies indeed $HH^* = I$. A consequence is that its eigenvalues are all on the unit circle, therefore it also won't change the norm of a quantum state (it is an isometry for the Euclidean norm).

A related question is whether the phase factor (a multiplicative factor of norm 1, see Wikipedia) matters. That is, are $|0\rangle$ and $e^{i\pi/3}|0\rangle$ different?

The answer (see here for more details) is that you don't really care about the phase because all experimental values are averages obtained as real eigenvalues of an Hermitial operator, hence the phase is ignored. However, the relative phases between states matter, like in $|0\rangle + e^{i\pi/3}|1\rangle$.

8
How does evolving a two-qubit state through a CNOT gate entangle them?
28
How to derive the CNOT matrix for a 3-qubit system where the control & target qubits are not adjacent?
2
What is the meaning of the state $|1\rangle-|1\rangle$?
2
The control phase gate in Quantum fourier transform and the question it brings up regarding control gates in general
4
Input and output qubit notation in quantum gates
1
How do I interpret the CNOT gate control-target structure after a basis-change?
3
Are there any single-qubit states $|a\rangle$ and $|b\rangle$ so that applying a CNOT to combined state $|ab\rangle$ changes the control qubit?
4
How does the CX gate work?
2
A CNOT between two Hadamard gates: why does the CNOT changed the output of the second Hadamard gate?