Drawing tangent vectors to the Bloch sphere with qutip

I need to plot drawings of qubit dynamics on the Bloch sphere. I know QuTip allows to do such drawings but I specifically need to represent evolution velocities on the Bloch sphere so I need to draw tangent vectors. Is there a way I can do it with QuTip? More generally it would be good to be able to draw affine vectors with QuTip. Do you know of any way I can do it? If this cannot be done with QuTip do you know of any other software that allows me to do it?

Reading the relevant doc page, this functionality does not seem to have been implemented. However, having a look at the relevant source code, it does not seem particularly difficult to add manually additional vectors to the Bloch sphere.

In particular, at least in the current version of qutip, the vectors are added via the method plot_vectors, which creates the arrows using an Arrow3D object. One can add any other vector to the sphere by simply adding new Arrow3D objects to the underlying matplotlib axes object.

Here is an example of how to do this: 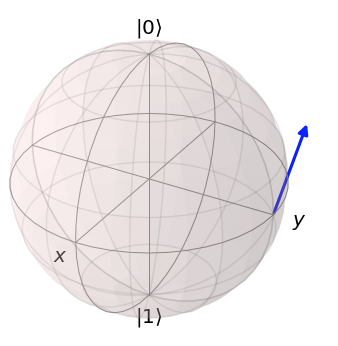 note that we need to call explicitly b.render instead of b.show because we need the axes object to be created but the plot to not be drawn before we add the new arrow.

Just change the coordinates given to the parameters xs, ys, zs to decide what vectors to draw.

As a final more or less unrelated note, you might also be interested in the drawing library plotly, which allows to build very nice 3d plots (see e.g. these examples).

4
Plotting Bloch sphere in QuTiP
1
Can't plot points on the Bloch sphere (QuTip)
6
Can we rotate Bloch vectors for qudits like we do with qubits in the Bloch sphere?
2
Efficient Representation of Qubits on a Digital Simulator
1
How do I implement $SU(2)$ rotation on the Bloch Sphere unsing qutip?
2
When using Qiskit's plot_bloch_vector function, how can I set colors for vectors?
2
Why does qutip run without errors, but cannot output a Bloch sphere graph?
1
Generating and executing large Pauli rotations in Python