I want to find efficient implementations using only CNOTs and single qubit gates. By efficient I mean that I want the lowest CNOT gate count possible.

I can also find $H_1$ using the incrementer

However, this uses gates with many controls. I am wondering, due to the symmetry, is it possible to significantly reduce the number of CNOTs to implement this circuit.

I currently have no idea how to tackle $H_2$. Any solution for these matrices, and or tips, references etc. would be greatly appreciated!

(You incremented the whole register instead of performing a controlled increment of part of the register. This just happens to be equivalent, modulo that last NOT gate on the control, because of how the increment circuit is built.)

In other words, $H_2$ is implemented in the same way as $H_1$ except you decrement instead of incrementing.

To optimize the circuit, you can use a more efficient linear-cost increment circuit such as the one explained in "Factoring with n+2 clean qubits and n-1 dirty qubits". 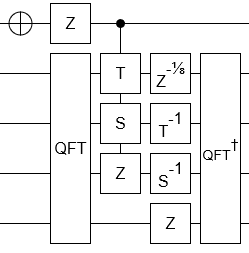 Which is equivalent to this:

Which still has two increments, but they are slightly smaller. I suspect there is a way to merge these two increments into one single addition.