How to implement a $\frac{\theta}{2}$ rotation from $\theta$ rotation?

Is there a way to create a rotation gate which has half the angle of some implementable gate?

but I'd like to construct the same gate but with $\theta=\frac{t}{2}$ so I can have two different oscillation frequencies.

Is there some standard way to do this?

(This answer is specific to the context of the question, which is about doing this construction out of Quirk's time dependent gates.)

It's not possible to have proper half-speed time-dependent rotations in Quirk. Behind the scenes there is actually a value $t$ that is varying from 0 to 1 and then cycling. If you managed to find a construction to cut the angle in half, your rotation would jump from 180 degrees to 0 degrees when $t$ went from 1 to 0.

If that's acceptable, then the simplest way to achieve it is by using the parameterized rotation gates and a counting gate: 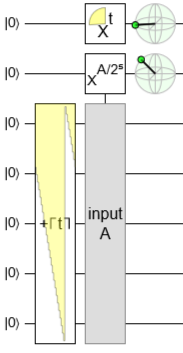 An alternative trade-off do is define double-speed rotations by using pairs of time-dependent rotation gates, and then work in units of $2t$ instead of $t$. You can use custom circuit gates to fuse them into a single block. If custom gates annoy you (they are by far the weakest part of the UX), the time-dependent gradient gate gives you a series of faster and faster rotations: 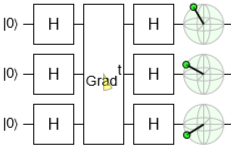 Not the answer you're looking for? Browse other questions tagged quantum-gate gate-synthesis quirk or ask your own question.

9
Does quantum control allow to implement any gate?
7
How to obtain Y rotation with only X and Z rotations gates?
1
Creating a time dependent custom gate in Quirk
8
Is there any method of adding two operators in a circuit?
2
Building an N-qubit Controlled S Gate
4
Constructing a circuit for $C^1(U)$ for rotation operators with TWO single qubit gates and CNOT gate
9
How to approximate $Rx$, $Ry$ and $Rz$ gates?
3
Can we understand multi-qubit gates in terms of rotation groups?
6
How to visualize Hadamard gate as $X$-$Z$-$X$ decomposition?