Suppose we have the quantum circuit below with a quantum register of 2 qubits and a classical register of 2 bits. The Hadamard gates and CNOT gate are not important for the question. When we measure a qubit we collapse it into one of the computational basis states (let's suppose we are working with the basis $ \{|0\rangle,|1\rangle\}$). But on Nielsen and Chuang's book, it says

Now here's what I don't understand: 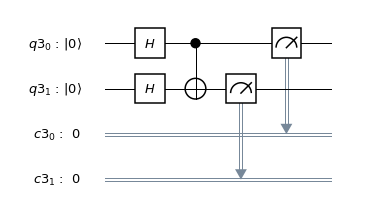 However, after it has collapsed to a bit, then, there is no probability associated with it, it certainly is $1$ for all future measurements, it shouldn't be a probabilistic bit.

In the circuit below, what is the need of registering the state of the qubit in a classical bit if it has collapsed irreversibly into that same state? Does it only make sense to do so when it is the end of the circuit?

This is already answered in Why do we need a Classical Register for carrying out Quantum Computations?

Not the answer you're looking for? Browse other questions tagged quantum-state circuit-construction measurement decoherence nielsen-and-chuang or ask your own question.

5
What would be the meaning of an $i$ in a qubit state $i\alpha|0\rangle+\beta|1\rangle$?
6
Error syndromes and recovery procedure in bit flip code
2
Measuring in an arbitrary basis
5
Problem 2.2 in Nielsen & Chuang - Properties of the Schmidt number
3
What are the possible qubit states?
4
How to transform a state with amplitude squared or to any power?
2
Why are the probabilities $|\alpha|^2$ and $|\beta|^2$ when measuring in the computational basis?
4
Exercise 4.41 in N&C book QCQI: how can i implement $R_z(\theta)$ using the circuit shown and $Z$?
0
Finding the measurement basis for single qubit with given probability of outcome $0$