Figure 1.16: FANOUT with the Toffoli gate, with the second bit being the input to the FANOUT (and the other two bits standard ancilla states), and the output from the FANOUT appearing on the second and third bits. 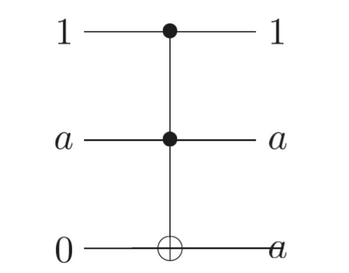 How can we say that the third qubit is in the state $a$?

Let's assume $a = x|0\rangle + y|1\rangle$. We know that the output of the bottom two qubits is $x|00\rangle+y|11\rangle$ (entangled qubits) and the output of the second qubit must be $x|0\rangle+y|1\rangle$. Which says that they both have to be in the state $|0\rangle$ and $|1\rangle$ at the same time, and so the third qubit should have the same probabilities as like of the second qubit. But it can be $-x|0\rangle + y|1\rangle$ and many more possibilities as $x$ and $y$ are complex (as probabilities are square of modulo of coefficients).

Please correct me if my interpretation and understanding is wrong.

This section of Nielsen & Chuang is talking specifically about simulating a classical circuit with a quantum circuit using Toffoli gate. So

Not the answer you're looking for? Browse other questions tagged quantum-gate classical-computing nielsen-and-chuang or ask your own question.

22
Toffoli gate as FANOUT
7
Simulation vs Construction of Fredkin gate with Toffoli gates
4
How to create an $n$-qubit normally controlled gate?
4
Why can't a fanout be made with a CNOT gate?
10
How and why does swap test works?
4
How does the CX gate work?
1
Why does the output from FANOUT appear on the second and third bits?