Expected repetitions of the quantum part of Shor's algorithm

Shor's algorithm to factor a number $N$ goes as follows:

My question is: how often do steps 4, 5, or 6 fail? Assuming an ideal quantum computer with no error, how often do you just get unlucky and pick a bad $b$ or sample a bad $v$? How many times do you expect to repeat step 2 before the factoring succeeds?

References giving numerical upper bounds on the 4-5-6 failure chance would be especially appreciated.

This self-answer gives a not-very-good worst case analysis. I'd really rather have a proper distribution of repetition counts.

Probability of a period resulting in factoring

In Shor's original paper, you can find the following statement:

The multiplicative group (mod $p^α$) for any odd prime power $p^α$ is cyclic [Knuth 1981], so for any odd prime power $p_i^{a_i}$, the probability is at most 1/2 of choosing an $x_i$ having any particular power of two as the largest divisor of its order $r_i$. Thus each of these powers of 2 has at most a 50% probability of agreeing with the previous ones, so all k of them agree with probability at most $1/2^{k−1}$, and there is at least a $1 - 1/2^{k-1}$ chance that the $x$ we choose is good. This scheme will thus work as long as $n$ is odd and not a prime power; finding factors of prime powers can be done efficiently with classical methods

This implies a 50% chance of success of getting a good period (steps 4+5), since all numbers have at least two distinct factors or else can be factored classically.

Probability of a sample determining a period

For getting a good sample (step 3), Shor gives a more complicated bound. If you sample a value with a $k$ that's not relatively prime to the period, the period you recover will be wrong. But integers have a limited number of divisors, and Shor cites a bound:

We know $r < N$, so this proves step 3 introduces at most $O(\lg \lg N)$ repetitions. It seems likely to me that this can be improved (e.g. if you keep replacing $b$ by $b^p$ when you get a bad $p$ that would presumably keep reducing $r$, or maybe that's bad?), and I'm sure someone has explained how to do this in great detail, but I don't know the reference.

"On Shor's Quantum Factor Finding Algorithm: Increasing the Probability of Success and Tradeoffs Involving the Fourier Transform Modulus" seems promising. It discusses using the lcm of two samples in order to get a constant probability of successfully recovering a period (~60%).

I also did some simulation of how many repetitions are needed when the two factors are similarly sized primes, using some basic post-processing, and it appears to converge to 1.5. The following plot is showing a blue dot for each factoring attempt, with a random +-0.5 on each dot's X and Y position so you get a sense of the density in each area. The thick black line is the average. 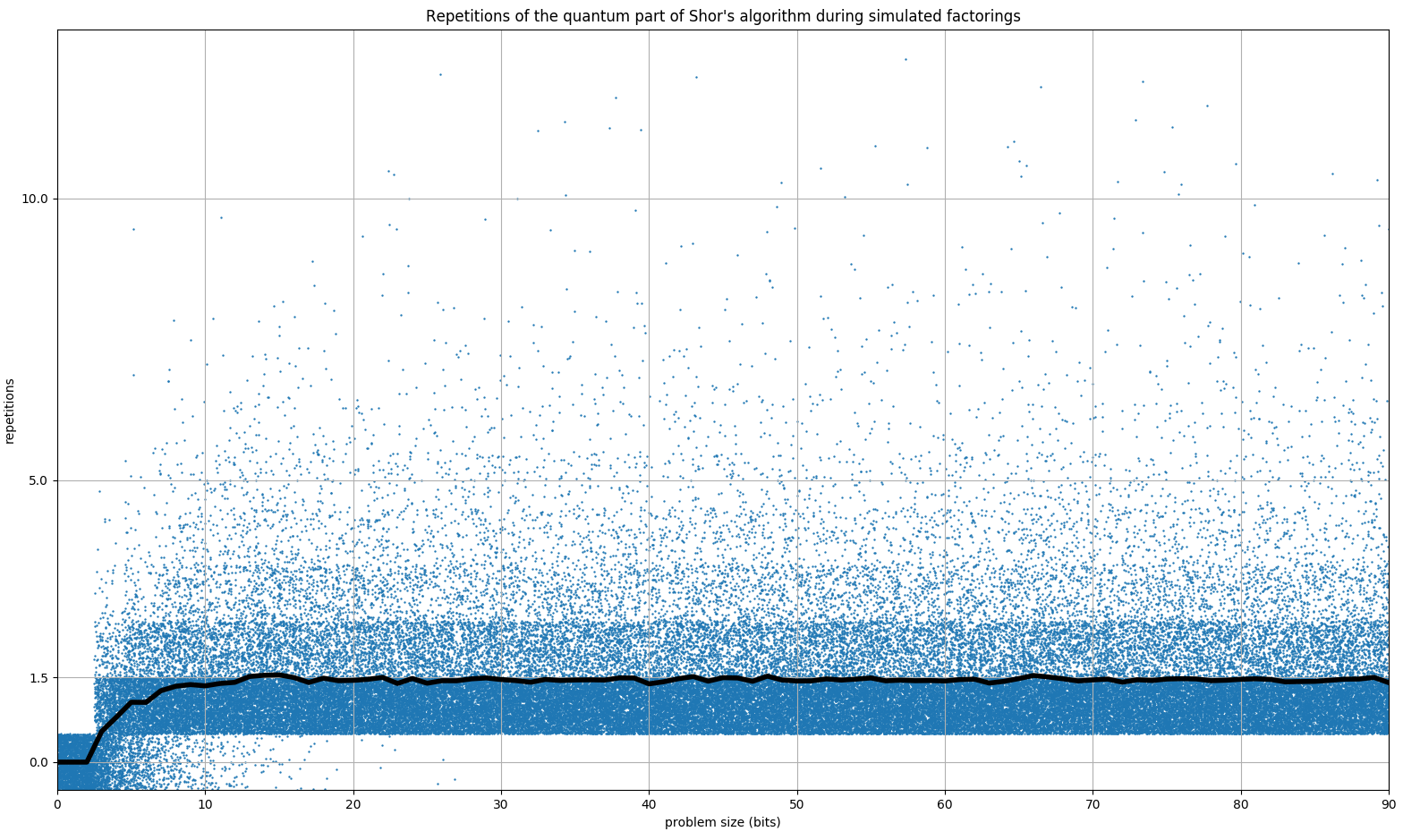 The number of runs required is arbitrarily close to 1, using the correct post-processing. See "On the success probability of quantum order finding" by Martin Ekerå from Jan 2022:

Not the answer you're looking for? Browse other questions tagged algorithm shors-algorithm or ask your own question.