Can the Bloch sphere be generalized to two qubits?

The Bloch sphere is a nice visualization of single qubit states. Mathematically, it can be generalized to any number of qubits by means of a high-dimensional hypersphere. But such things are not easy to visualize.

What attempts have been made to extend visualizations based on the Bloch sphere to two qubits?

For pure states, there is a reasonably simple way to make a "2 qubit bloch sphere". You basically use the Schmidt decomposition to divide your state into two cases: not entangled and fully entangled. For the not-entangled part, you just use two bloch spheres. And then the entangled part is isomorphic to the set of possible rotations in 3d space (the rotation is how you translate measurements on one qubit into predictions on the other qubit). This gives you a representation with eight real parameters:

1) A real value w between 0 and 1 indicating the weight of not-entangled vs fully-entangled.

Here's what it looks like if you show the rotation part as "where X Y and Z axes get mapped", and additionally scale the axes by w so that it gets bigger the more entangled you are:

(The bouncing in the middle one is due to a numerical degeneracy in my code.)

For mixed states, I've had a bit of success showing the envelope of bloch vectors predicted for qubit 2 given every possible measurement of qubit 1. That looks like this:

But note that a) this 'envelope' representation is not symmetric (one of the qubits is the control and the other is the target) and b) although it looks pretty it's not algebraically compact.

This display is available in the alternate dev-entanglement-display branch of Quirk. If you're able to follow the build instructions, then you can play with it directly.

This is the basis of the Majorana stellar representation construction. A state of a qudit living in a Hilbert space of dimension $2j+1$ can be represented by $2j$ points on the Bloch sphere. The state vector can be reconstructed from the $2j$ (2-dimensional) spin vectors of the $2j$ points by a symmetrized tensor product.

(The parametrization is by means of the stereographic projection coordinate $ z = \tan \theta e^{i\phi}$ ($\theta$, $\phi$ are the spherical coordinates))

Finally, let me remark that there are many geometric representations relevant to quantum computation, but they are multidimensional and may be not useful in general as visualization tools. Please see for example Bernatska and Holod treating coadjoint orbits which can serve as phase spaces of the finite dimensional Hilbert spaces used in quantum computation. The Grassmannian which parametrizes the ground state manifold of adiabatic quantum Hamiltonians is a particular example of these spaces.

We have some multiqubit visualizations within Q-CTRL's Black Opal package.

These are all fully interactive and are designed to help build intuition about correlations in interacting two-qubit systems.

The two Bloch spheres represent the relevant separable states of two qubits. The tetrahedra in the middle visually capture correlations between certain projections of the two qubits. When there is no entanglement, the Bloch vectors live entirely on the surfaces of the respective spheres. However, a fully entangled state lives exclusively in the space of correlations in this representation. The extrema of these spaces will always be maximally entangled states like Bell states, but maximally entangled states can also reside within multiple tetrahedra simultaneously. 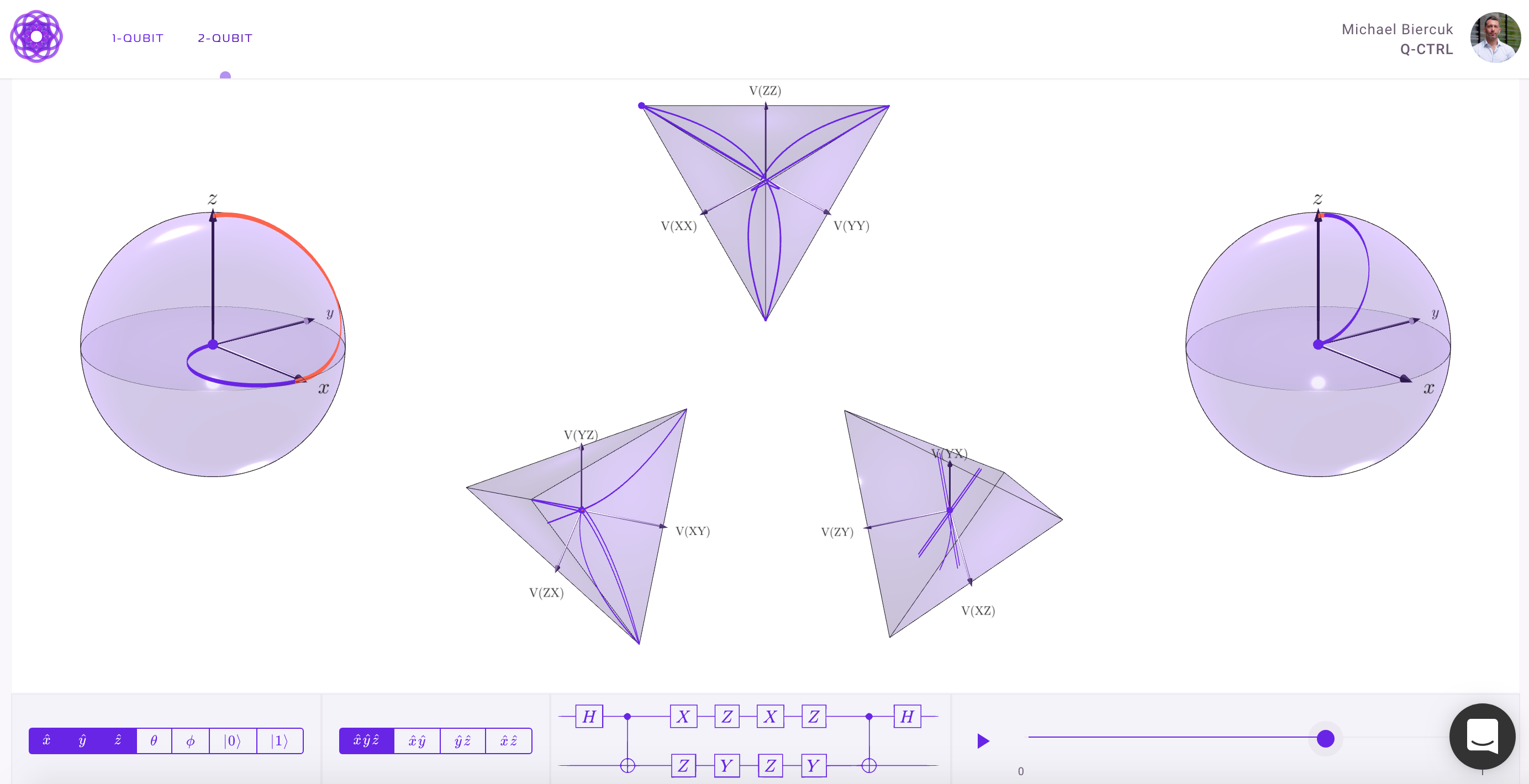 For more than 1-qubit visualization, we will need more complex visualizations than a Bloch sphere. The below answer from Physics Stack Exchange explains this concept quite authoritatively:

Bloch sphere for 2 and more qubits

In another article, the two qubit representation is described as a seven-dimensional sphere, S 7, which also allows for a Hopf fibration, with S 3 fibres and a S 4 base. The most striking result is that suitably oriented S 7 Hopf fibrations are entanglement sensitive.

Having said that, a Bloch sphere based approach is quite useful even to model the behavior of qubits in a noisy environment. There has been analysis of the two-qubit system by use of the generalized Bloch vector to generate tractable analytic equations for the dynamics of the four-level Bloch vectors. This is based on the application of geometrical concepts from the well-known two-level Bloch sphere.

We can find that in the presence of correlated or anti-correlated noise, the rate of decoherence is very sensitive to the initial two-qubit state, as well as to the symmetry of the Hamiltonian. In the absence of symmetry in the Hamiltonian, correlations only weakly impact the decoherence rate:

There is another interesting research article on the representation of the two-qubit pure state parameterized by three unit 2-spheres and a phase factor.For separable states, two of the three unit spheres are the Bloch spheres of each qubit with coordinates (A,A) and (B,B). The third sphere parameterises the degree and phase of concurrence, an entanglement measure.

This sphere may be considered a ‘variable’ complex imaginary unit t where the stereographic projection maps the qubit-A Bloch sphere to a complex plane with this variable imaginary unit. This Bloch sphere model gives a consistent description of the two-qubit pure states for both separable and entangled states.

A paper has been published on the subject, called "Bloch sphere model for two-qubit pure states"

Not the answer you're looking for? Browse other questions tagged resource-request bloch-sphere state-space-geometry or ask your own question.

1
Can a many-qubit quantum state be represented on Bloch spheres?
3
What is the meaning of writing a state in its Bloch representation?
2
Can everything in QM be described with degrees instead of matrices and vectors?

4
Homeomorphism or stereographic projection corresponding to the set of mixed states within the Bloch sphere
10
Is there any online Bloch sphere simulator?
3
How are orthogonal sets of pure states arranged in state space?
3
Can a qubit be in the inside of the Bloch Sphere?
5
Why is the Bloch sphere three-dimensional?
6
Can we rotate Bloch vectors for qudits like we do with qubits in the Bloch sphere?