Are correlations stronger than those allowed by quantum mechanics possible?

Yes, it is possible to conceive theories with "stronger correlations" than those given by quantum mechanics.

One way to make this statement precise is to consider some kind of "measurement apparatus" (you can think of it as simply a black a box with some buttons that you can push and different LEDs that correspond to different possible outputs), and analyse the set of correlations between inputs and outputs that different physical theories allow for.

For example, if you have two possible inputs and two possible outputs than the set of possible theories, often referred to as behaviours in this context, is the set of probabilities $\{p(a|x)\}_{x,a\in\{0,1\}}$. This is the set of vectors $\boldsymbol p$ in $[0,1]^{2^2}\subset\mathbb R^{2^2}$ normalised to one. In other words, it's a section of the $2^2$-dimensional hyperplane. More generally, in this context, it is common to consider a Bell-like scenario in which two parties are involved and each has its own box. Then, if each party can choose between $m$ possible inputs and can get $\Delta$ possible outputs, the set of possible behaviours is a hyperplane $\mathcal P\subset\mathbb R^{\Delta^2 m^2}$, which therefore has dimension $(\Delta^2-1)m^2$.

The behaviours allowed by quantum mechanics are a strict subset of $\mathcal P$.

One can consider different restrictions imposed on a physical theory and study the corresponding set of possible behaviours. A first natural assumption is to require a theory to be no-signalling, which means that it doesn't allow for faster-than-light communication. The set $\mathcal{NS}$ of no-signalling behaviours is strictly larger than the set $\mathcal Q$ of quantum behaviours. In the context of CHSH inequalities, the boundary between $\mathcal{NS}$ and $\mathcal Q$ would be observable via Tsirelson's bound, which tells us that quantum mechanics cannot produce correlations such that $S>2\sqrt 2$ (where $S$ is the usual operator defined for CHSH inequalities). Similarly, the boundary between $\mathcal Q$ and the set $\mathcal L$ of local (classical) behaviours can be witnessed via the standard Bell's inequalities. See the following picture representing the relations between these different sets (taken from Brunner et al., pag. 7): 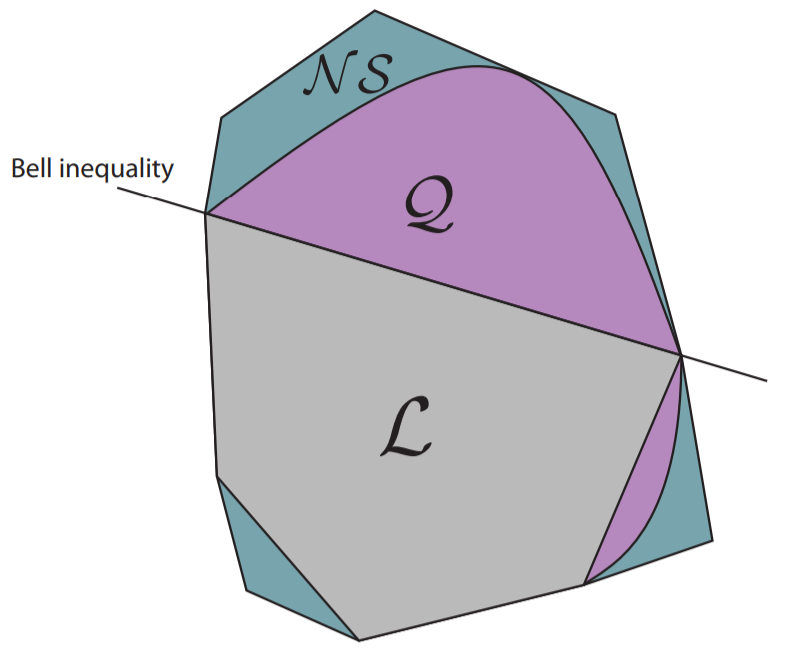 If you don't want to assume anything about a theory, then no, there are no restrictions at all. Any correlation between present and future is in principle possible.

This question is precisely answered within the following work: https://arxiv.org/abs/1511.08144

They basically present that quantum bounds are basically the upper bounds for classical probabilistic correlations. And this is not unique to quantum mechanics, the upper bounds can be attained by other frameworks which are deterministic. They present a simple experiment based on tree network via which this can be realized.

Not the answer you're looking for? Browse other questions tagged non-locality games correlations foundations or ask your own question.

7
What is the no-signaling set and how can it be related to other types of correlations?
6
In Bell nonlocality, why does $P(ab|xy)\neq P(a|x)P(b|y)$ mean the variables are not statistically independent?

13
What is the relationship between the Toffoli gate and the Popescu-Rohrlich box?
7
Is there a relation between the factorisation of the joint conditional probability distribution and Bell inequality?
5
Determining whether $P(ab|xy)$ factorizes in Bell experiments
8
Proof of optimality for CHSH game classical strategy
5
Why is $P(1,2)_{\text{same}} = \frac{1}{4}$ and not $\frac{1}{2}$ in Preskill's Bell experiment?
3
How is Bell’s Inequality converted to the CHSH inequality?
5
Is Connes' Embedding Problem akin the word problem for finitely presented groups?
4
How does a classical computer simulate nonclassical correlations?
3
$\rho_{SE}(0)=\rho_S(0)\otimes\rho_E(0)$: No coupling or no entanglement?