I'm working through a problem set, and I've come across the following problem:

In this problem, you'll explore something that we said in class about the Many-Worlds Interpretation of quantum mechanics: namely, that "two branches interfere with each other if and only if they produce an outcome that's identical in all respects." Consider the n-qubit "Schrodinger cat states" $$\frac{|0\cdots 0 \rangle + |1 \cdots 1 \rangle}{\sqrt2}$$ a) What probability distribution over n-bit strings do we observe if we Hadamard the first $n-1$ qubits, then measure all n qubits in the $\{ |0 \rangle , |1 \rangle \}$ basis?

c) What probability distribution over n-bit strings do we observe if we Hadamard all $n$ qubits, then measure all n qubits in the $\{ |0 \rangle , |1 \rangle \}$ basis?

I have solved the problem as follows:

a) Equal probability of seeing any n-bit string of qubits.

d) Different. Same state as b.

What I don't understand is what this has to do with the Many-Worlds Interpretation! Could someone explain the significance of this exercise? Thanks!

I should probably start by describing my philosophical standpoint: I would never talk about "many worlds" or some such. However, I certainly believe that it is possible that everything, including measurement, is unitary. That apparently makes me a many-worldian. It's not necessary to buy wholesale into a picture of diverging worlds. And I think this question demonstrates my (possible) view point quite well.

So, I think of measurement as being like a controlled-not, but because the measurement device is a large device, it's like targetting many qubits. So, if you've got a qubit in $|0\rangle+|1\rangle$ that you might be measuring, the post-measurement state would be $$ \frac{1}{\sqrt{2}}\left(|000\ldots 0\rangle+|111\ldots 1\rangle\right) $$ (Aside: you might even consider yourself part of the measuring device. At that point, if you're in the 0 branch, you see results 0, and the you're in the 1 branch, you see 1 results). The issue is, if this is true, why do we end up describing something post-measurement using classical probabilities, i.e. $$ \frac12\left(|000\ldots 0\rangle\langle000\ldots 0|+|111\ldots 1\rangle\langle 111\ldots 1|\right)? $$ The answer is basically, that, if you made sure that you did something with every quantum system that has become entangled as a result of the measurement, you would be able to see a difference between the quantum and classical descriptions (answer c$\neq$d). Miss just one qubit (which may be part of the measurement device, or somewhere else in the environment. there's so many that you'll always miss some), and all subsequent results are as if you had the classical probability distribution (answer a=b).

Hopefully you now see how that should correspond to the questions you're being asked. As other commenters have indicated, however, the measurement process that you're performing on the two different systems is the full combination of Hadamards+computational basis measurement.

The "many-world's interpretation" is an interpretation of wavefunction collapse in which if the wavefunction is in the state $\frac{1}{\sqrt{2}}\left(|0\rangle + |1\rangle\right)$ and you get $|0\rangle$ when you measure the state, there is a different parallel universe somewhere in which $|1\rangle$ was measured.

The picture right at the top of the many-worlds Wikipedia page depicts exactly this (the cat dies in one universe and survives in another): 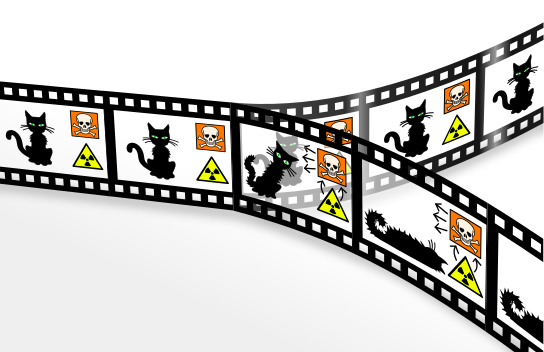 What does it mean to be a "different" universe, if the universe is everything? Well Hawking talked about this in the first page of his book Brief History of Time. He defines our universe to be literally everything that is physically capable of having any influence on any measurement that anything in our universe ever makes. Therefore there is not much value in talking about other universes, because by definition we will not be able to make any measurements to test any theories we have about other universes, and if we could, then by definition they would be part of our universe (so not actually a different universe).

So it was a trick question. Probabilities do not depend on the "interpretation" they use, they depend on the theory you use: classical mechanics, quantum mechanics (Schroedinger's equation), quantum electrodynamics, quantum chromodynamics, string theory, loop quantum gravity, or whatever you wish.

You are therefore correct, and may also want to point out to your professor that s/he is missing a square root symbol in the denominator, otherwise these states are not normalized and the probabilities given as the square moduli of the coefficients, will not add up to 1, which violates the definition of probability that all probabilities should add up to 1.

*The image is courtesy of Christian Schirm who made the image himself and put it on Wikipedia with the Creative Commons license.

3
Does the Copenhagen interpretation (+ "quasi-classical measuring apparatus") allow one to bypass a derivation's objection?
10
On the distribution of the fidelity of a random product state with an arbitrary many-qubit state
6
How close or far apart are the distributions generated by two Haar random states?
3
Confusion about the output distribution of Haar random quantum states
0
Quantum supremacy: shallow depth Haar random circuits and unitary designs
2
How to calculate the evolution of ket states through a simple quantum circuit?
4
Error correction on $n$ qubits all in same state except for a few