Constructing the GHZ-state is simple for arbitrary $n$. However, implementing the $W_n$-state is more difficult. For $n=2$ it is easy, and for $n=4$ we can use

Even for $n=3$ we have implementations, see this answer for instance. However, I have not found an algorithm that, given an $n$, outputs the circuit for constructing the $W_n$-state.

Does such an algorithm, defined by single- and two-qubit gates, exist? And if so, what is it?

Yes, there are several implementations of this algorithm in the Superposition quantum kata (tasks 14 and 15):

This is my favorite task of that kata, because it allows so many different approaches.

The conceptually simplest way to produce a W state is somewhat analogous to classical reservoir sampling, in that it involves a series of local operations that ultimately create a uniform effect.

Basically, you look at each qubit in turn and consider "how much amplitude do I have left in the all-0s state, and how much do I want to transfer into the just-this-qubit-is-ON state?". It turns out that the family of rotations you need is what I'll call the "odds gates" which have the following matrix:

Using these gates, you can get a W state with a sequence of increasingly-controlled operations: 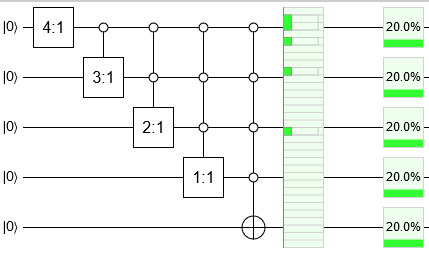 This circuit is somewhat inefficient. It has cost $O(N^2 + N \lg(1/\epsilon))$ where $N$ is the number of qubits and $\epsilon$ is the desired absolute precision (since, in an error corrected context, the odds gates are not native and must be approximated).

It is still possible to do better, but it starts to get complicated. Basically, you can use a single partial Grover step to get $N$ amplitudes equal to $\sqrt{1/N}$ but they will be encoded into a binary register (we want a one-hot register with a single bit set). Fixing this requires a binary-to-unary conversion circuit.

The binary to unary conversion:

You can define the sequence recursively. Conceptually, what you want to do is:

This algorithm, as expressed, is not made up of only one- and two-qubit gates, but it can certainly be broken down as such by standard universality constructions.

Also, this may not be the most efficient algorithm you could come up with. For example, if $N=2^n$, you could use just $n$ layers of square-root of swap gates to produce what you want -- start with a $|1\rangle$ on a single qubit. Root-swap with a second qubit, and you've got the $|W_2\rangle$ (up to phases that you'll need to take care of). Put an ancilla next to both of these, and do root swaps between W-ancilla pairs, and you've got $|W_4\rangle$, repeat and you've got $|W_8\rangle$, and so on. I believe this is basically what they do experimentally here. You should be able to incorporate this algorithm into the first one to make it more efficient ($O(\log N)$) for any arbitrary size, but I've never stopped to work out the details with any great care.

Based on this paper, I have implemented the W state for n-qubits by Qiskit. Here is my code:

Not the answer you're looking for? Browse other questions tagged algorithm entanglement quantum-state or ask your own question.

3
Circuit to construct a $n$-qubit state which is a superposition of states with only a single qubit being $\lvert1\rangle$
11
How to create quantum circuits from scratch
4
How to get all combinations of given input?
3
Entanglement distribution of W-State over different locations
4
How to measure superposition coefficients to determine state?
1
Uniform superposition of states with one qubit set to $|1\rangle$ and others to $|0\rangle$
1
Generalized construction of W basis

5
Grover's algorithm with W-state
4
How to measure superposition coefficients to determine state?
6
What does W stand for in the W entangled state?
2
How to identify entanglement in a given pure state?
0
How to switch bit in the quantum state?
3
What is k-state and how to go about creating a circuit?
1
How to analyze the following quantum circuit?
5
What does the partial trace of $|W\rangle$ states represent physically?