A quantum gyroscope is a very sensitive device to measure angular rotation based on quantum mechanical principles. The first of these has been built by Richard Packard and his colleagues at the University of California, Berkeley. The extreme sensitivity means that theoretically, a larger version could detect effects like minute changes in the rotational rate of the Earth.

There is a section on Wikipedia titled Equation with no information in it.

Can any one help fill in the blank?

By a quantum gyroscope, it is usually meant a device or a sensor capable of measuring the same quantities as a classical gyroscope, namely angular velocities or orientations but with extremely higher precision, limited only by the Heisenberg uncertainty due to the exploitation of the quantum nature of the sensor.

The principle of measurement accuracy enhancement to the Heisenberg uncertainty limit, by means of quantum operations such as entanglement and squeezing is general and should be implementable in various technologies. Please see the following review by Giovannetti, Lloyd and Maccone.

This principle was used by Dowling to propose a quantum gyroscope based on an atomic Mach-Zehnder interferometer.

Angular velocity measurement by means of interferometry is based on the Sagnac effect, where when a quantum particle moves around a closed loop in a rotating system, it acquires a geometric phase proportional to the angular velocity $\omega$ and the loop area $A$: $$\phi = \frac{8 \pi}{\lambda c} \omega A$$ $\lambda$ is the wavelength and $c$ is speed of light.

(Remark: holonomic quantum computing gates are based on Non-Abelian generalization of this phase).

The Dowling quantum gyroscope setup is depicted in the following diagram (extracted from Dowling's paper), 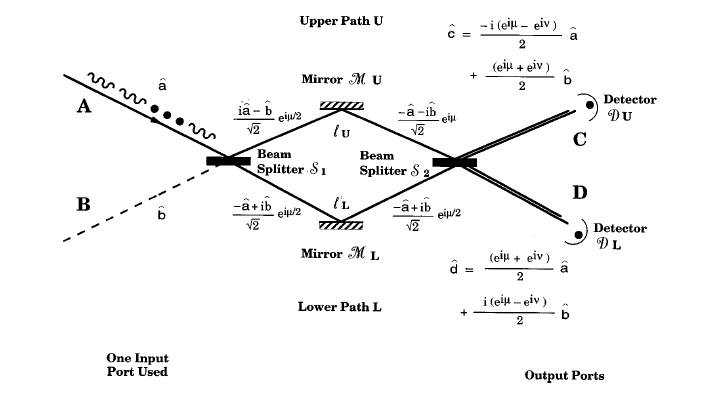 Where two beams of particles or modes $A$ and $B$ are split at a first beam splitter, reflected by mirrors and recombined at a second beam splitter. Two detectors are used to count the particle numbers at the output. A rather straightforward analysis (given in the Dowling's reference) shows that the geometric phase can be computed from the sum and difference of the detectors measurements. Dowling showed that the input beams are in a separable state: $$|\psi \rangle_{I} = |N\rangle_A |0\rangle_B $$ The phase measurement accuracy is the classical shot noise limit: $$\Delta \phi \approx \frac{1}{\sqrt{N}}$$ While when the input beams are in the entangled state:

In quantum radars, exactly the same principle (i.e., scattering entangled states) is used to enhance the accuracy to the Heisenberg limit.

Not the answer you're looking for? Browse other questions tagged foundations or ask your own question.