How do the probabilities of each state change after a transformation of a quantum gate?

Quantum gates are represented by matrices, which represent the transformations applied to qubits (states).

Suppose we have some quantum gate which operates on $2$ qubits.

Case I: The 2 qubits are not entangled.

Now, what happens if we apply a quantum gate without performing any measurement on the previous state of the system? Quantum gates are unitary gates. Their action can be written as action of an unitary operator $U$ on the initial state of the system i.e. $ac|00\rangle+ad|01\rangle+bc|10\rangle+bd|11\rangle$ to produce a new state $A|00\rangle+B|01\rangle+C|10\rangle+D|11\rangle$ (where $A,B,C,D\in\Bbb{C}$). The magnitude of this new state vector: $|A|^2+|B|^2+|C|^2+|D|^2$ again equates to $1$, since the applied gate was unitary. When the first qubit is measured, probability of $|0\rangle$ occurring is $|A|^2+|B|^2$ and similarly you can find it for occurrence of $|1\rangle$.

But if we did perform a measurement, before the action of the unitary gate the result would be different. For example of you had measured the first qubit and it turned out to be in $|0\rangle$ state the intermediate state of the system would have collapsed to $\frac{ac|00\rangle + ad|01\rangle}{\sqrt{(ac)^2+(ad)^2}}$ (according to the Copenhagen interpretation). So you can understand that applying the same quantum gate on this state would have given a different final result.

Case II: The 2 qubits are entangled.

In case the state of the system is something like $\frac{1}{\sqrt{2}}|00\rangle + \frac{1}{\sqrt{2}}|11\rangle$ , you cannot represent it as a tensor product of states of two individual qubits (try!). There are plenty more such examples. The qubits are said to entangled in such a case.

Again if you apply a unitary quantum gate on this state, you'd end up with something like $A|00\rangle+B|01\rangle+C|10\rangle+D|11\rangle$, as before. I hope you can now yourself find out the probabilities of the different possibilities when the first and second qubits are measured.

Yes, it is possible. The quantum gates are designed such that given input states are transformed to well defined output states with computable probabilities. The transformation does not constitute a measurement in the sense of quantum mechanics, this means that we can have entangled states in the output of a quantum gate and use these states for further computation.

Note also that the input states are no longer accessible after being transformed by a quantum gate. If you want to get them back, you have to apply an inverse gate. 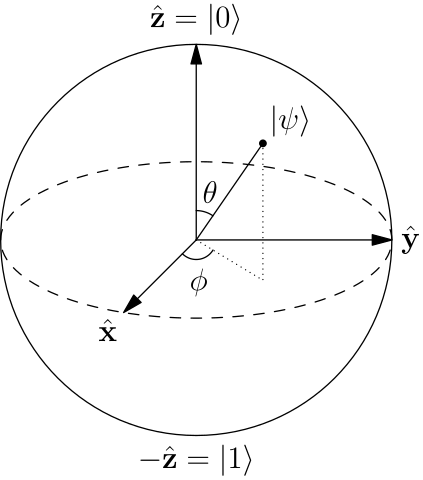 How does this gate act on a qubit and affect the measurement outcomes?

Say you begin with a qubit in the state $|0\rangle$, i.e., at the north pole on the Bloch sphere. You apply a unitary of the form $U = e^{-i \gamma Y}$ where $\gamma \in \mathbb{R}$. Using properties of the Pauli matrix, we get $U = e^{-i \gamma Y} = cos(\gamma) \mathbb{I} -i sin(\gamma) Y$. The action of this operator is to rotate the state by an angle $2 \gamma$ along the y-axis and therefore if we choose $\gamma = \pi/2$, the qubit $|0\rangle \rightarrow U|0\rangle = |1\rangle$. That is to say, given we know what unitary we are applying to our state, we completely know the way in which our initial state will transform and hence we know how the measurement probabilities would change.

As you said, the probabilities of measurements are obtained from the state. And the gates operate unitarily on the states. Consider the POVM element $\Pi$, a state $\rho$ and a gate $U$. Then the probability for the outcome associated with $\Pi$ is $p=\mathrm{tr} (\Pi \rho)$, and the probability after the gate is $p'=\mathrm{tr}(\Pi U \rho U^\dagger)$.

24
What level of "confidence" of the result from a quantum computer is possible?

28
How does measurement of one qubit affect the others?
5
What exactly is a phase vector?
3
Explanation of output produced by the following quantum circuit
7
How to represent an $n$-qubit circuit in matrix form?
1
How can a half-wave plate affect the position qubit and not the polarization qubit of a photon?
4
Question About How Qiskit Reset Gate Affects Other Entangled Qubits
1
How do quantum gates work on qubits in the physical world?