How to store error caused by circuit manipulation

I am interested into not performing the last CNOT. Rather, I want to keep track of the error I intentionally introduced by removing it.

I am trying to do this by means of auxilliary qubits.

Intuitively, I may do this by means of the following protocol:

However, this doesn't seem to me as it does the right correction.

On contrary, I found that the following protocol gives the right density matrix:

Here I just removed what it was supposed to be a $Z$ correction. I don't get why it is not necessary (or maybe I am just using quirk's tools wrong).

If you want to propagate a non-Pauli operator through a stabilizer circuit, a useful conversion is to transform it into a form where all the non-Pauli stuff is hidden away on ancilla qubits.

For example, a CNOT can be rewritten like this: 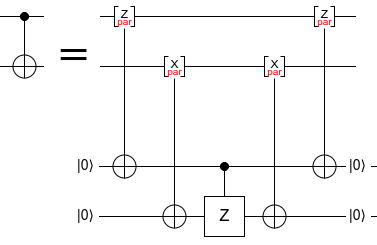 Which seems like a terrible idea, but because the parts touching the main circuit area are just Pauli product controls you can now easily move it through stabilizer operations by rewriting the Paulis. For example:

Once you've finished moving it to its final destination, you can attempt to convert back to a circuit that doesn't use ancilla qubits. Or just leave it in this form; it's really quite a useful way to understand a CNOT in a more generalized basis-independent way. It negates the amplitude of states in the intersection of the -1 eigenspaces of two Pauli product observables.

This same trick works for any operation you want to move through a circuit, including non-Clifford operations like Toffoli gates and T gates. It's the same underlying idea behind Clifford frame tracking used in "A Game of Surface Codes".

7
How to avoid error when applying certain combinations of degree of freedom rotations using a quantum circuit?
7
SWAP gate(s) in the $R(\lambda^{-1})$ step of the HHL circuit for $4\times 4$ systems
8
Topological Circuit Simulator
3
Basics on CSS codes: manipulation of the ancillas to detect error
1
How to realize this quantum error correction circuit on real hardware?
1
Circuit for implementing Steane's code for Quantum Error Correction
2
Circuit of quantum error correction code
6
Why do we need to keep of history of $d$ cycle for surface code in order to resist against data *and* measurement errors
4
What is wrong with my circuit for the fourth-root of $X$?