Is there an alternative algorithm to extract a probability of states of qubit after measuring?

Let a simple quantum circuit consist of one qubit and one classical bit. Initially, a qubit has the $|0\rangle$-state and then goes through some sequence of quantum gates, see the circuit below. 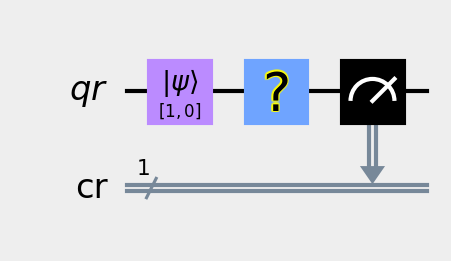 It is interesting is it possible to do it with another way? Is there maybe a quantum algorithm that ables to do such a thing?

I think what you want is the quantum amplitude estimation algorithm developed by Brassard et al. here.

The algorithm works by performing quantum phase estimation (really eigenvalue estimation) on the Grover operator $G=CR_0C^*R_{\psi_1}$ used in the amplitude amplification algorithm (such an algorithm can be used to boost the probability of obtaining the state $|\psi_1\rangle$ from $C$), where $C$ is the circuit and $R_0$ is the unitary reflection about $|0\rangle$ and $R_{\psi_1}$ is the reflection about $|\psi_1\rangle$. I'll refer you to the links above for the details.

Note that the Grover operator $G$ will need to be queried multiple times to obtain the estimate, and the full complexity is related to how much error you are willing to accept in your estimate of $p$. However, I believe that this algorithm is optimal due to the lower bound on the complexity of Grover search (i.e. amplitude amplification).

15
How to compactly represent multiple qubit states?
3
What are some examples of measuring qubits in different basis states?
3
What is the property of any entangled pair of qubits?
1
Measuring Probability of Mixed States
0
how to plot probability histogram and/or bloch sphere of single qubit in multi-qubit quantum circuit in Qiskit?
3
Probability of measuring one qubit from the state of two qubits
1
Can I see Probability in complex form after measuring the state of the qubit on quantum computer?
3
Why would measuring a qubit determine the states of the other qubits?
3
Measuring in rotated basis for mult-qubit circuits