For Shor's error correcting code, what is the intuition behind saying that the following circuit corrects the phase flip error?

I realize that the circuit is trying to compare phases of the three 3-qubit blocks, two at a time. But I don't understand how the Hadamards and CNOTs help in that task. It seems different from the general method followed for phase error correction with three qubits encoded in the Hadamard basis. It also seems to entangle the two ancillas at the end with the encoded 9 qubit code. 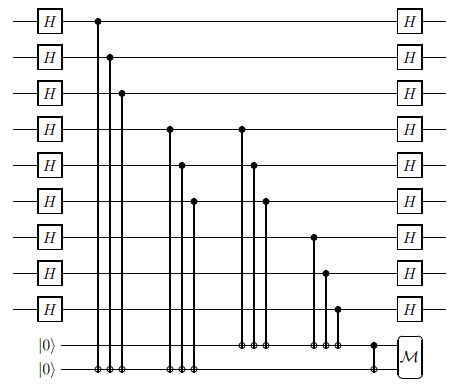 So, in the example suggested above where a phase error touched qubit 1, 2, or 3, the first six controlled-NOT gates have the combined effect of flipping the second syndrome qubit, while the remaining controlled-NOT gates collectively do nothing. This results in the syndrome 01, which indicates a phase flip in block number 1 (i.e., the first three qubits). You can check that a phase error in a different block gives an appropriate outcome, and that if no phase errors occurred, the syndrome 00 is obtained, indicating no phase errors.

Note that this does not entangle the syndrome qubits with the other qubits, so when you do all of the Hadamard gates again, you recover the original input state. Of course this assumes an input of the special form described above; if you put in an arbitrary state, you might very well end up with something entangled with the syndrome.

15
What is a Bacon-Shor code and what is its significance?

8
Intuition for Shor code failure probability
6
Error syndromes and recovery procedure in bit flip code
3
Basics on CSS codes: manipulation of the ancillas to detect error
3
Quantum error correction using bit-flip code for the amplitude damping channel
2
Phase flip error correction on state $|0\rangle$
3
How to compute the error threshold for the $9$-qubit Shor code?
1
In Shor’s 9-qubit code, is the error syndrome for qubit 5 phase-flip the same as that for qubit 6 phase-flip?
3
Accuracy threshold theorem: what is the physical probability of failure exactly