On the photonic implementation of Shor's code 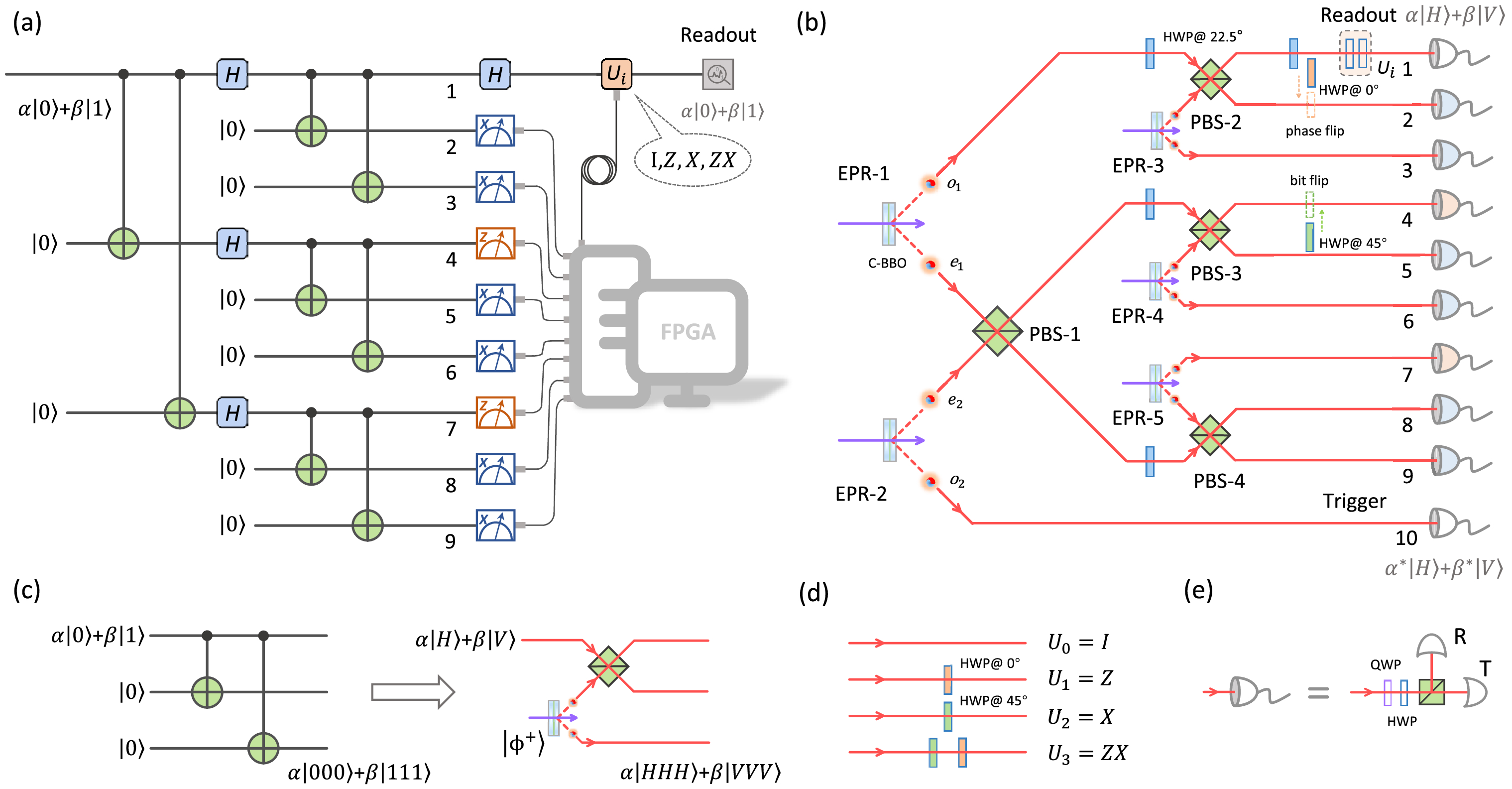 The above picture comes from this paper.

I can see that the standard Shor's code has been re-designed.

I have two main doubts:

To understand the role of the 10th trigger photon, and how it is used to effectively "choose" the input state for the rest of the circuit, remember that each photon source generates (in this type of encoding) a Bell pair.

Focus on EPR-2 in (b). This generates a Bell state, something like $|00\rangle+|11\rangle$. Each space corresponds here to the polarisation state of a photon. The first photon (i.e. the left space) then mingles with the rest of the circuit and does its thing. You can sum this up as the rest of the circuit amounting to some isometry $V$ acting on the first qubit, and giving 3 qubits as output: $(V\otimes I)(|00\rangle+|11\rangle)$. In other words, this $V$ encodes everything else that happens in the upper part of (b).

The bottom rail, i.e. the second photon generated by EPR-2, i.e. the second space in our formalism, is instead projected onto the state $|\psi\rangle\equiv \bar\alpha|0\rangle+\bar\beta|1\rangle$. Such projection amounts to obtaining the (normalised version of the) state $$(I\otimes \langle\psi|)(V\otimes I)(|00\rangle+|11\rangle) = V(\alpha|0\rangle+\beta|1\rangle).$$

You can thus see that performing the projection on the second system amounts to changing the input state entering $V$ in the first system. It's a bit like teleporting the state you want at the beginning of the circuit by suitably projecting at the end (except not really, because teleportation is built to have it work deterministically, which is not what happens here).

Practically speaking, doing this projection means that they use the waveplates to select a measurement basis, and then only keep the measurement results corresponding to one of the two associated outcomes. For example, if they want to project on $|0\rangle+|1\rangle$, they use a QWP (whose action amounts to performing an Hadamard operation on the qubit), and keep results corresponding to the first detector clicking. To see is, observe that the QWP maps $c_1 a_H^\dagger+c_2 a^\dagger_V\to(c_1+c_2)a_H^\dagger+(c_1-c_2)a_V^\dagger$, the PBS will send $a_H^\dagger$ on one rail (say, $R$ in the figure) and $a_V^\dagger$ in the other, and thus the $R$ detector will click with probability $|c_1+c_2|^2$.

Please note that, physically speaking, this means that the experimenters cannot really decide what to input in the circuit. They cannot tune some plates to, say, always use as input $|0\rangle+|1\rangle$. Instead, what they do is choose the measurement basis on the last photon, collect all measurent results, and then only look at those where the last photon was found in the detector $R$ rather than $T$. The data on the rest of the circuit will then be identical to just entering the circuit with the state $|0\rangle+|1\rangle$.

To understand the rest of the circuit, we can think of it as composed of four different blocks. Three nearly identical blocks, equal to Fig. (c), and the following block before those: 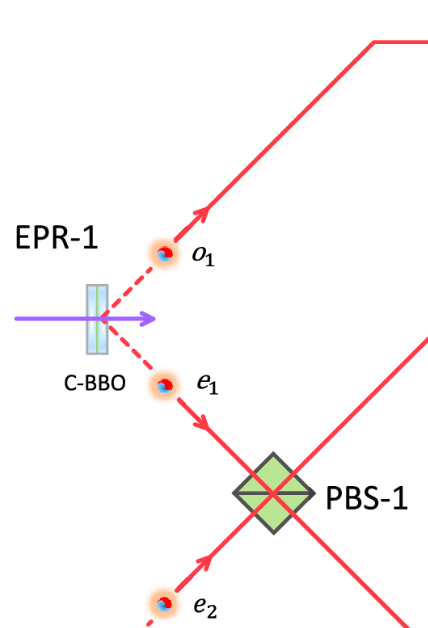 The other three blocks are actually essentially identical to this one, so the same reasoning works there. The overall result is that post-selecting on events where all detectors from 1 to 9 click, you get the state you want.

Notice that in the "Experimental Setup" chapter, the 10th qubit (also marked as $o_2$) is a qubit that is just used as a trigger. You should be aware of post-selection - not all outcomes are successful, the computer is choosing only those who succeeded, this is because CNOT is not determisticly possible in linear optics. Therefore qubit 10 helps the computer to know if the answer is correct. Anyway, here is the only explanation about this qubit in the article:

It is not a part of the 9 qubits code, and it is measured by a polarized encoded qubit - using 2 detectors - one for $H$ and one for $V$: 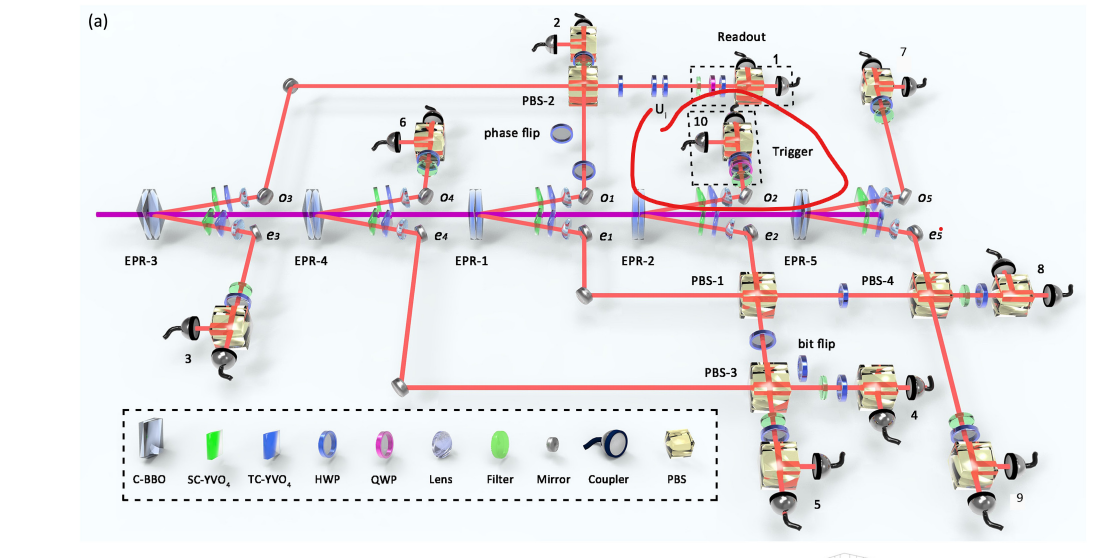 1
Faithful description of a photonic setting with the circuit model

6
Error syndromes and recovery procedure in bit flip code
1
How does the unitary encoding procedure in quantum secret sharing schemes or error correcting codes work?
4
How to measure syndromes in QEC
2
Understanding the (2,3) threshold quantum secret sharing scheme in Cleve et al. 1999
4
The merging operation is not symmetric on its inputs in surface code as it should naturally be
0
When are the following equivalences correct?