Why am I able to simulate such high qubit numbers on my laptop?

Recently I've been working on a VQE-related project, for which I'm using Qiskit's TwoLocal variational form (qiskit version 0.34.2). I noticed that I was able to simulate this circuit up to surprisingly high qubit numbers on my laptop, so I wanted to investigate this in a bit more detail. I ran the following piece of code for varying num_qubits:

When I plot t2-t1 as a function of num_qubits, I get the following result: 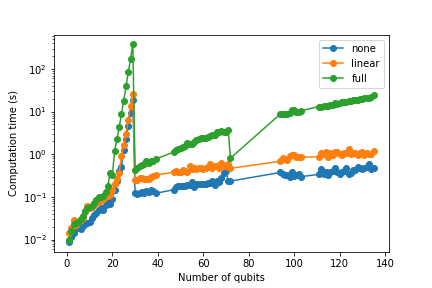 Note that linear and full refer to the corresponding entanglement modes of the TwoLocal function for reps=1. 'none' refers to the TwoLocal circuit with reps=0. In those regions without data points my code actually crashed, i.e. when running inside a jupyter notebook it says "kernel died" and when running it inside a script in the terminal it says "Segmentation fault (core dumped)". Also, there's a special mention for the case of 72 qubits, for which the code doesn't crash but the result always gives $|0\rangle^{\otimes n}$ with 100% probability, which obviously doesn't make sense.

My main question is the following: why am I able to simulate entangled circuits with such high qubit numbers, and quite fast at that? According to this link the only simulator which simulates more than 100 qubits is the stabilizer simulator, but I'm using gates which are not in its supported gates set (i.e. Ry gates with random angles).

I have two related bonus questions (I know each post should ideally be "laser-focused" but I think these questions are too related to warrant a separate post so please bear with me):

Thanks in advance to anyone who can point me in the right direction!

The AerSimulator backend supports a variety of simulation methods, each of which supports a different set of instructions and has a different memory requirements. The method can be set manually using simulator.set_option(method=value)[1] [2].

According to the source code here (C++ code), selecting the simulation method follows these steps:

Not the answer you're looking for? Browse other questions tagged qiskit simulation vqe or ask your own question.

3
Generate the state $\frac{-|0\rangle + |1\rangle}{\sqrt{2}}$ with qiskit: problem with Pauli-Z behavior
2
Specifying qubits to achieve measurement error mitigation on Qiskit
3
Statevector Simulation of QAOA always finds exact solution
1
In the HHL alghoritm, how can I transform my hermitian matrix into a unitary operator?
2
How to simulate the state of a system after partial measurement?
1
How to access a qiskit runtime job and query time_taken?
1
Rigetti "Timeout on client tcp://127.0.0.1:5555, method name quil_to_native_quil" error