I have had a few ideas for circuits that I would like to get feedback on (do such things already exist, what utility they serve, etc).

Any suggestions on how I might graphically render these? 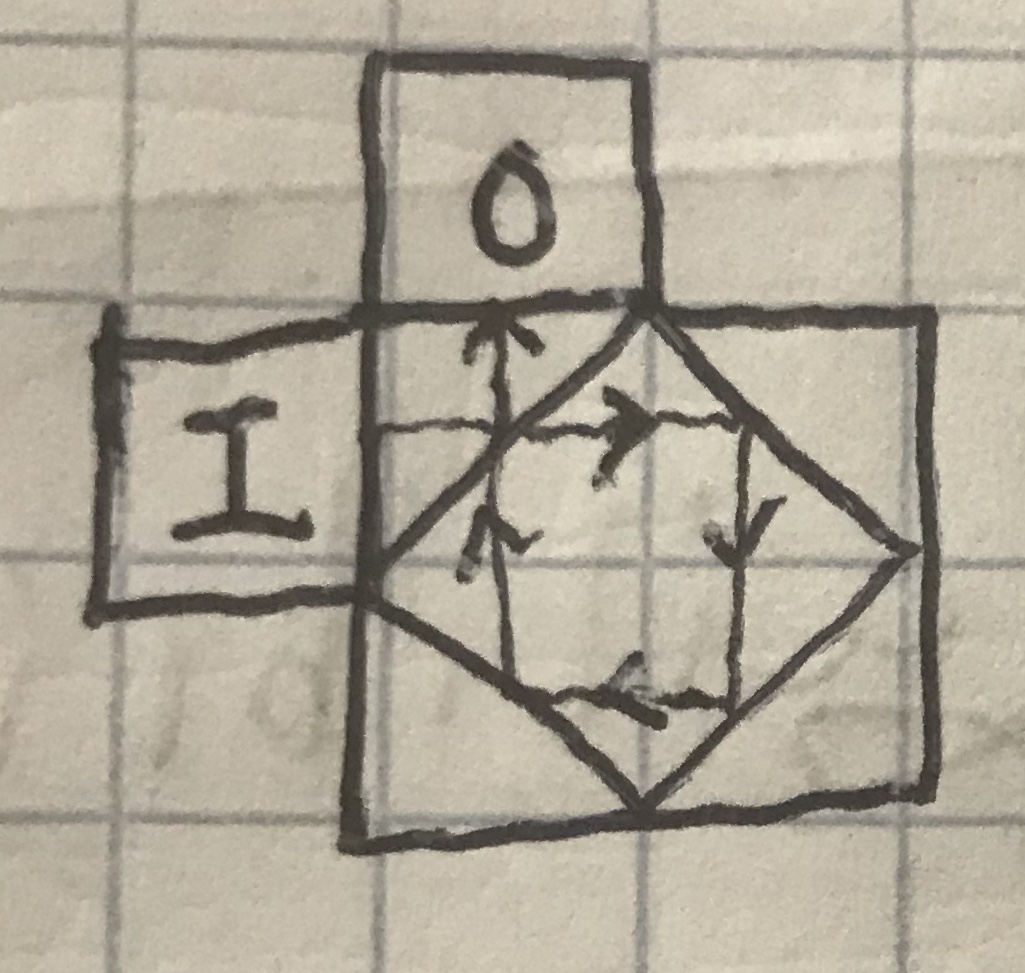 Here i is the input & o is the output. The slash directly to the right of the input is a 50/50 beam splitter. The remaining slashes are mirrors.

This process could be run thru $n$ times until some desired outcome is reached.

Does this already exist? What is the utility (if any)?

To answer your first, general question: Optical circuits are usually drawn with a selection of conventional symbols, a directory of which to draw them can be found here.

With respect to that specific circuit, if a single photon was input, the output would produce a state in a decaying superposition of subsequent time bins. If you choose a temporal basis for your output photons $|t_k\rangle$, taking $|t_0\rangle$ as the time bin of your the first pass through the beamsplitter and $|t_1\rangle$ as the time bin of the next pass, etc, then the output state will be given by $$ \sum_{k=0}^\infty \left(\frac{e^{-i\phi}}{\sqrt{2}}\right)^{k+1}|t_k\rangle, $$ where $\phi$ is the phase shift imparted on each photon after a single pass of the loop.

Alternatively, if you only care about the input and output photons, this can be more generally be represented by the Bogoliubov transformation on the optical mode operators $$ a^\dagger_t \mapsto \sum_{k=0}^\infty \left(\frac{e^{-i\phi}}{\sqrt{2}}\right)^{k+1} b^\dagger_{t+k} $$

where $a_t^\dagger$ and $b^\dagger_t$ are the creation operators for photons in time bin $t$ in the optical input and output modes respectively.

Personally, I haven't seen this sort of state before and don't know any particular use for it. However, there may be some use for it in some sort of strange loop-based architecture for linear optical quantum computing, although I would doubt it.

Not the answer you're looking for? Browse other questions tagged circuit-construction photonics or ask your own question.

4
How to complete this teleportation circuit? How to create a copy of $|\psi〉$?
1
I made a simple circuit on qiskit,but I have some question on this result