How are two different registers being used as "control"?

On page 2 of the paper Quantum Circuit Design for Solving Linear Systems of Equations (Cao et al.,2012) there's this circuit: 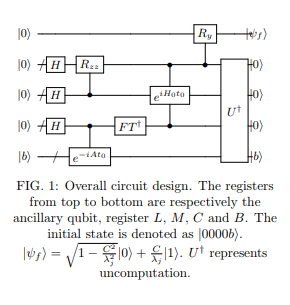 We further establish the control relation between Register $L$ and $\exp[-ip\left(\dfrac{\lambda_j}{2^m}\dfrac{1}{2^{l-k_l}}\right)t_0]$ simulation that acts on register $M$. The values of the binary numbers stored in register $L$ are then able to determine the time parameter $t$ in overall Hamiltonian simulation $\exp(-iH_0t)$.

You can see from the circuit diagram that in the third-last slice, both registers $L$ and $C$ are being used as controls. There's no problem with two registers being controls, after all, that's exactly what a Toffoli (controlled-controlled-NOT) gate does. It probably helps to explicitly write down what transformation they're talking about. I'll call it $U$. (I'm mostly extrapolating this from what you've written, rather than delving extensively into the paper or references.)

Before I do that, I just want to change notation slightly, because what I see there, I find slightly misleading. If the eigenvalues of $At_0$ are $\lambda_j$, then the states of the register $C$ might better be written as $k\in\{0,1\}^t$ (assuming $t$ qubits are being used) with $\lambda_jt_0=2\pi k/2^t$. You could say that $|\lambda_j\rangle$ is an appropriate label for the ket, but it makes me think of the eigenvector, rather than the binary representation of the (rescaled) eigenvalue.

Not the answer you're looking for? Browse other questions tagged quantum-gate circuit-construction hamiltonian-simulation or ask your own question.

6
How exactly is the stated composite state of the two registers being produced using the $R_{zz}$ controlled rotations?