What components are needed to realize a photonic CNOT gate?

What components are needed to realize a photonic CNOT gate?

Contrary to DaftWullie's answer, it is possible to implement a CNOT gate in a photonic system with 100% efficiency.

However, there are caveats to this - it depends on what's used as the qubits (or, as this is a photonic system, potentially qudits) in the system.

KLM: A photon as a qubit

The first thing that most people think of in terms of photonic qubits is polarisation. In this case, postselection (/heralding) is generally required. This was theoretical shown to be possible by Knill, Laflamme and Milburn (KLM) in 2001. Within a couple of years, the first probabilistic photonic CNOT gate was shown by O'Brien et. al. (arXiv version) in an equivalent scheme, as shown in figure 1. 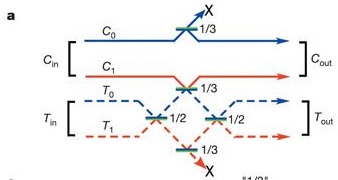 Figure 1: Circuit diagram of probabilistic 2-photon CNOT gate. Each photon (control and target) is encoded from polarisation to spatial modes. After postselecting on a single photon in $C_{\text{out}}$ and a single photon in $T_{\text{out}}$, when the control photon, $C$, is in spatial mode $C_0$, the identity operation is performed on the target photon, $T$, while when $C$ is in $C_1$, the NOT (X) operation is performed on $T$ which has a probability of success of 1/9. Uses beamsplitters. Image taken from Figure 1a of O'Brien et. al.

One variation of this is to use a nonlinear phase shift to make a deterministic version of this.

Reck: Many modes makes... Many dimensions

One other such method was proposed before KLM by Reck et. al. (shown in figure 2) and has since been improved upon by Clements et. al. In this a single photon is encoded in some number, $d$, of spatial modes. This is equivalent to a $\log_2 d$ qubit system and can be used to implement any unitary. For a 2-qubit system, this is equivalent to having 4 spatial modes labelled $\left|00\right>, \left|01\right>, \left|10\right>$ and $\left|11\right>$ and a CNOT operation is equivalent to swapping the bottom 2 $\left(\left|10\right> \text{ and } \left|11\right>\right)$ modes.

Figure 2: Image of a 6-mode Reck scheme chip, which can be used to implement a deterministic 'CNOT' gate. Uses phase shifters and beam splitters to build up a unitary evolution over the modes of the system. Image taken from Figure 1 of Carolan et. al.

Of course, it's not quite that simple and, due to requiring an exponential number of modes, the Reck scheme isn't generally considered to be overly scalable.

That leaves us with the (final) two options1: nonlinear optics (continuous variable) and measurement based quantum computing

As detailed in my answer here, continuous variable QC also offers a universal gateset which can be used to make arbitrary unitaries, in theory at least. Unfortunately, as more squeezing is still required, an experimental realisation of this is yet to occur.

And now for something completely different: Measurement based

Another scheme that hasn't been experimentally achieved, yet shows potential, is measurement based QC. Instead of performing CNOT gates during unitary evolution that defines a circuit, the entangling operations occur as part of the state preparation of the system. As per Ewert and Loock (arXiv version) the current idea of doing this involves generating small clusters of entangled photons, then entangling these into larger clusters using fusion gates, as shown in figure 3. 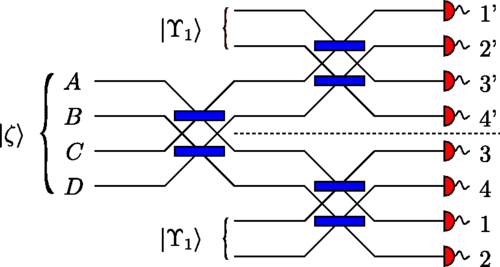 Figure 3: Diagram of a 75% efficient fusion gate. Inputting the state $\left|\Upsilon_1\right> = \frac{1}{\sqrt 2}\left(\left|20\right> + \left|02\right>\right)$ allows for the detection of higher dimensional states. These can then be cascaded to detect larger and larger cluster states. The probabilistic measurement is equivalent to an entangling operation, similar to a CNOT gate. Image taken from Figure 1 of Ewert and Loock.

The original question was asking with respect to a particular Quantum Game. This quantum game only contains the elements of linear optics, not all optics, so it was basically asking how CNot can be realised with linear optical elements.

This cannot be done with 100% efficiency. However, there are schemes that allow it to work in a heralded way, i.e. it works sometimes, and you know if it's worked. One of the best known schemes is the KLM scheme, which has since been described in more detail in the other answer. However, the efficiency can be very low. The other problem is that when the scheme fails, what happens to the information you tried to compute on? Depending on the scheme, it could be destroyed. A good way around this is with measurement-based quantum computation, where you can "grow" a resource state first, and only once you've been successful do you actually compute with it.

One recent experiment is described here, and their main optical circuit is reproduced below: 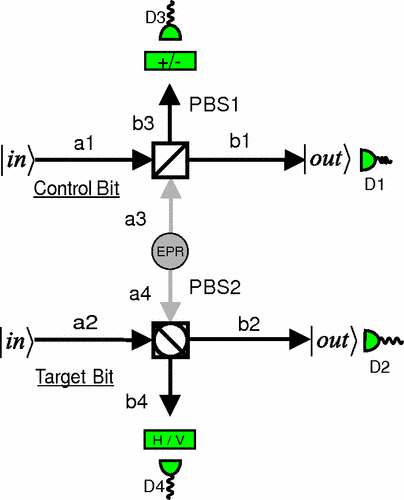 However, the linear optical elements are supplemented by the presence of an entangled pair of photons to enhance the success rate. I don't think the game currently has the capability of producing those: the typical way to get them is to introduce a non-linear crystal that splits a single photon into an entangled pair.

Not the answer you're looking for? Browse other questions tagged quantum-gate gate-synthesis photonics or ask your own question.

14
What is the mathematical justification for the "universality" of the universal set of quantum gates (CNOT, H, Z, X and π/8)?
8
Construct Controlled-$G^{\dagger}$ from known Controlled-$G$
5
What are some good resources for learning about photonic qubits?
2
A question about a real programmable quantum computer
3
Tool to verify $CNOT$ (or any interacting 2-qubit gate)
3
How to create CNOT from an entangling gate and arbitrary single-qubit gates?