Magic state distillation with the $15$ qubit code. How are the transversal $T$ performed? Also via a (lower level) state injection?

I have a code $C1$ that admits native fault-tolerant gates for any element in the Clifford group (for instance via transversal implementation), but that then doesn't have an easy way to perform the $T$ gate.

In practice, to implement the $T$-gate we can use state injection and create a logical ancilla state in the state $|A\rangle=T |+\rangle$.

A way to create the $|A\rangle$ state in a reliable manner is to make use of a code that has a native fault-tolerant $T$ gate. The $15$ qubit code is such example (the $T$-gate is transversal).

In practice, to prepare $|A\rangle$, we then:

(Of course we have to repeat the procedure to have a reliable state but I skip this un-necessary detail for my question).

For $C_1$ we do not have a fault-tolerant $T$ gate. However, we need to do a $T$ gate within this code for step 2 of the procedure I described. How is it done? Do we use either one of the following methods? Another thing I am not thinking of?

You start with physically injected magic states, expanded into $C_1$. In the case of the surface code you could use e.g. Li injection. 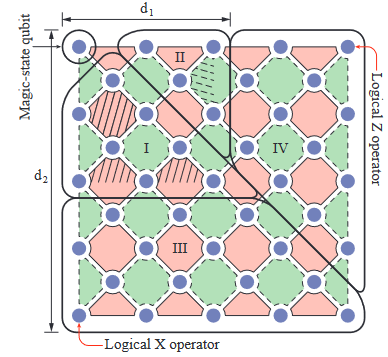 The error rate of this part is extremely important, as it limits how few levels of distillation you will need to reach target error rates.

Once you have T states you do T gates in the next distillation level via gate teleportation.

1
Pros/cons of the different schemes to have complete fault-tolerant gatesets
8
Magic state distillation: why is it harder to prepare the encoded $|A_{\pi/4}\rangle$ than $|0 \rangle$
7
Is Toffoli a fault tolerant transversal gate of the repetition code on bit-flip-error-only qubits?
3
Magic state distillation with the 15 qubit code. Why is the failure $O(p^2)$ if we include $|+_L\rangle$ preparation and decoding?
6
Why does code switching not allow for universal fault-tolerant quantum computation?
1
What are the transversal gates of the [[5,1,3]] code?
4
What are the transversal gates of Shor's $[\![9,1,3]\!]$ code?
6
How to intuitively understand why $T$ gate can't be implemented transversally?