when calculating code thresholds, why do we need to take a number of rounds that scales with the code distance?

In stim's error corretion example here, and in pymatching's toric code example here, the threshold calculation involves taking a number of rounds that scales as the code distance. Why is that the right way to do it?

To test what's going on if I try to do it some other way, calculated the threshold with a fixed number of rounds, yet much larger than the distance, and I get something that behaves reasonably until some "pseudo threshold" value, and then the errors seem to more or less track each other. How can we explain this behavior?

Here's an example of a surface code with rounds = 3 * distance as in the stim example: 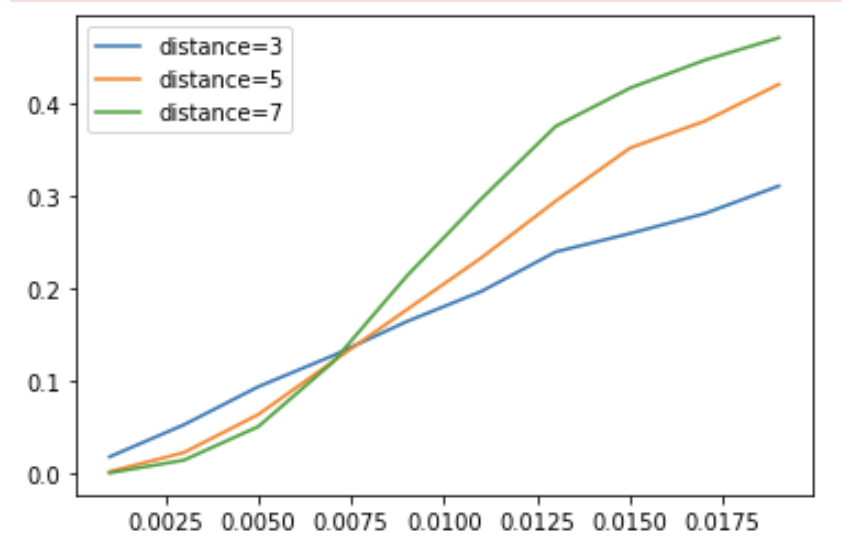 and here's one with rounds=20: 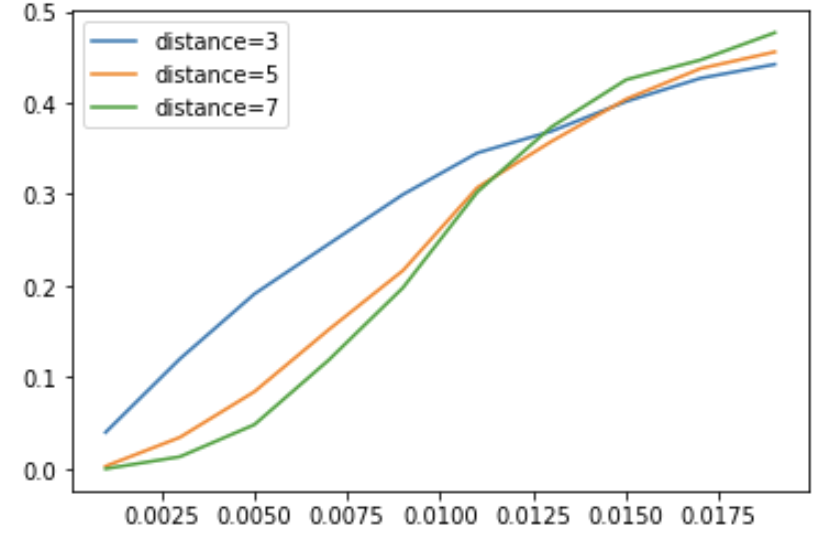 BTW, I have a vague feeling that this is somehow related to this question.

(Note: you should take more data so those curves have less noise. You might also want to plot standard deviations of some sort so you can see the noise. The Stim example keeps to really low rep rates so it finishes in under a minute, not because that's recommended.)

The reason you want more and more rounds is because of boundary effects. Near boundaries, whether they be spatial boundaries or temporal boundaries (data initialization and measurement), the number of possible error chains is lower than in the bulk. Because errors that would have careened around without a care in the world instead slam into a wall. As the code distance gets bigger, the relevant error chains get longer, so the boundaries need to be further and further away. The threshold people are usually interested in is the threshold of the bulk, with boundaries nowhere nearby, and these can be different values. 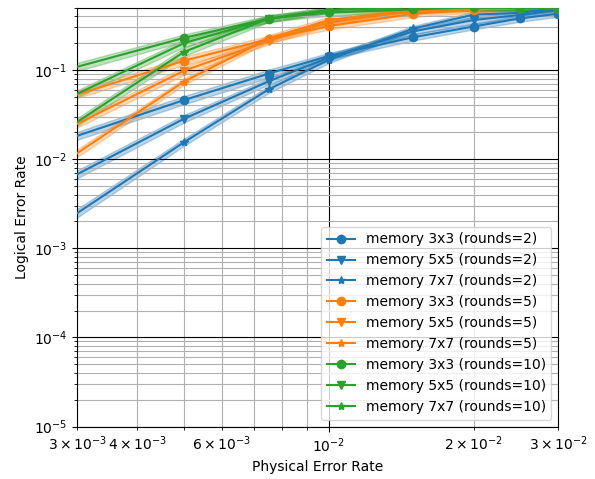 Incidentally, this is one of the reasons error correction experiments that do repetitive measurement instead of a single-shot thing are much more impressive. Single-shot experiments are like setting the number of rounds to 1, and have a much easier threshold.

Not the answer you're looking for? Browse other questions tagged error-correction surface-code stim or ask your own question.

14
Why do error correction protocols only work when the error rates are already significantly low to begin with?
3
In the three-qubit bit flip code, why can the first bit flip without impacting the entanglement with the other qubits?
1
how to simulate toric and surface codes with stim + PyMatching
3
What is the meaning of "shots" and "rounds" in Stim?
5
Algorithm resource estimation: why "usually" only the $T$ gate count is being provided. When the Clifford count is provided, does that include Id gate
4
compatibility of stim's error model with conventional decoding schemes
2
nonlinear behavior of $1/\Lambda$ in surface code simulations around threshold
2
Magic state distillation with the 15 qubit code. Why is the failure $O(p^2)$ if we include $|+_L\rangle$ preparation and decoding?