In the paper: Quantum algorithm for linear systems of equations (Harrow, Hassidim & Lloyd, 2009), what's written up to the portion

The next step is to decompose $|b\rangle$ in the eigenvector basis, using phase estimation [5–7]. Denote by $|u_j\rangle$ the eigenvectors of $A$ (or equivalently, of $e^{iAt}$), and by $\lambda_j$ the corresponding eigenvalues.

on page $2$ makes some sense to me (the confusions up till there have been addressed in the previous posts linked above). However, the next portion i.e. the $R(\lambda^{-1})$ rotation seems a bit cryptic.

for some large $T$. The coefficients of $|\Psi_0\rangle$ are chosen (following [5-7]) to minimize a certain quadratic loss function which appears in our error analysis (see [13] for details).

2. After the phase estimation step, the state of our system is apparently:

Names and symbols used in this answer follow the ones defined in Quantum linear systems algorithms: a primer (Dervovic, Herbster, Mountney, Severini, Usher & Wossnig, 2018). A recall is done below. 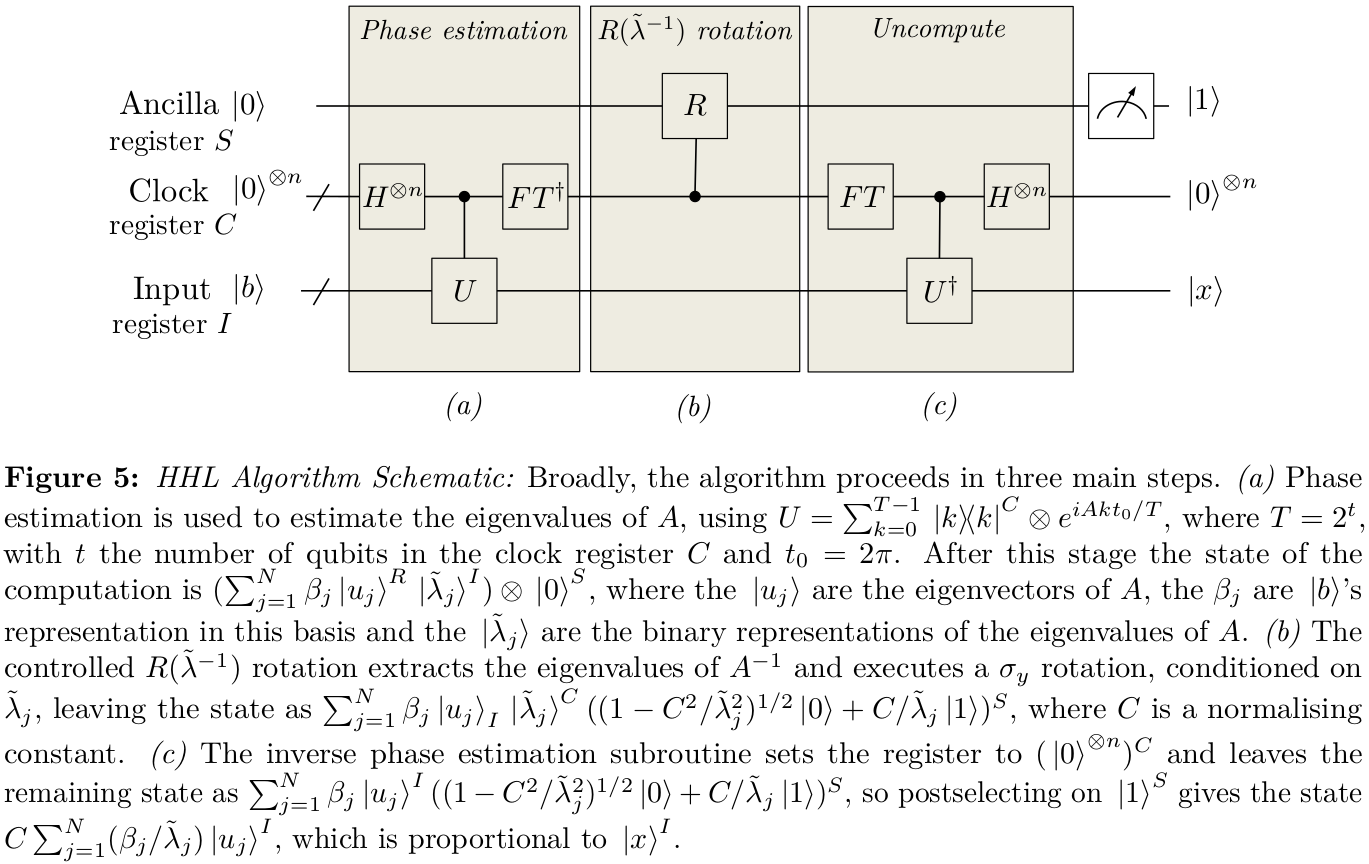 Their phase estimation algorithm is:

The first part in the sum $|\tau\rangle \langle \tau|^{C}$ is a control part. It means that the operation will be controlled by the state of the first quantum register (the register $C$ as the exponent tells us).

The second part is the "Hamiltonian simulation" gate, i.e. a quantum gate that will apply the unitary matrix given by $e^{iA\tau t_0/T}$ to the second register (the register $I$ that is in the initial state $\left|b\right>$).

The whole sum is the mathematical representation of the controlled-U operation in the quantum circuit of "1. Definitions", with $U = e^{iA\tau t_0/T}$.

$\newcommand{\bra}[1]{\left\langle#1\right|}\newcommand{\ket}[1]{\left|#1\right\rangle}\newcommand{\proj}[1]{|#1\rangle\langle#1|}\newcommand{\half}{\frac12}$In answer to your first question, I wrote myself some notes some time ago about my understanding of how it worked. The notation is probably a bit different (I've tried to bring it more into line, but it's easy to miss bits), but attempts to explain that choice of the state $|\Psi_0\rangle$. There also seem to be some factors of $\frac12$ floating around in places.

When we first study phase estimation, we're usually thinking about it in respect to use in some particular algorithm, such as Shor's algorithm. This has a specific goal: getting the best $t$-bit approximation to the eigenvalue. You either do, or you don't, and the description of phase estimation is specifically tuned to give as high a success probability as possible.

In HHL, we are trying to produce some state $$ \ket{\phi}=\sum_j\frac{\beta_j}{\lambda_j}\ket{\lambda_j}, $$ where $\ket{b}=\sum_j\beta_j\ket{\lambda_j}$, making use of phase estimation. The accuracy of the approximation of this will depend far more critically on an accurate estimation of the eigenvalues that are close to 0 rather than those that are far from 0. An obvious step therefore, is to attempt to modify the phase estimation protocol so that rather than using `bins' of fixed width $2\pi/T$ for approximating the phases of $e^{-iAt}$ ($T=2^t$ and $t$ is number of qubits in phase estimation register), we might rather specify a set of $\phi_y$ for $y\in\{0,1\}^t$ to act as the centre of each bin so that we can have vastly increased accuracy close to 0 phase. More generally, you might specify a trade-off function for how tolerant you might be of errors as a function of the phase $\phi$. The precise nature of this function can then be tuned to a given application, and the particular figure of merit which you will use to determine success. In the case of Shor's algorithm, our figure of merit was simply this binning protocol -- we were successful if the answer was in the correct bin, and unsuccessful outside it. This is not going to be the case in HHL, whose success is more reasonably captured by a continuous measure such as the fidelity. So, for the general case, we shall designate a cost function $C(\phi,\phi')$ which specifies a penalty for answers $\phi'$ if the true phase is $\phi$.

If you want to get the same $|\Psi_0\rangle$ as reported in the HHL paper, I believe you have to add the terms $-\frac14\left(\ket{0}\bra{T-1}+\ket{T-1}\bra{0}\right)$ to the Hamiltonian. I have no justification for doing so, however, but this is probably my failing.