Encoding a block unitary matrix in a quantum circuit

However it is not so clear to me how to implement the above block matrix structure in circuit form.

Say you have the circuit to implement the unitary $U_{1}$, given by 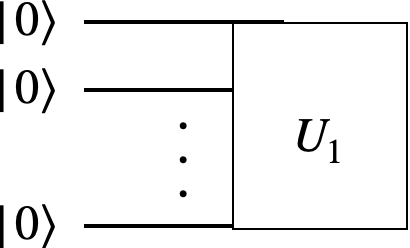 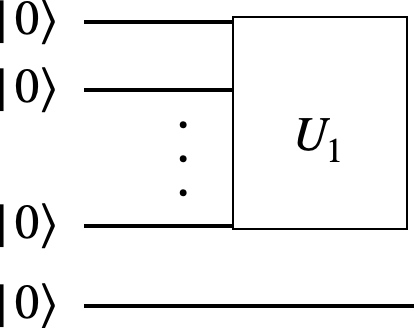 However I am not sure how to do something similar when $U_{0} \neq U_{1}$ but as the matrix will still be unitary there still should be a circuit performing the block encoding given access to $U_{1}$ and $U_{0}$ however whether this will require controlled unitaries and is constructible in a similarly efficient manner I don't know!

Alternatively, implement $U_1$ on every qubit except the control, then do controlled-$U_0U_1^\dagger$.

If you have the circuit to implement $U_1$, you can make controlled-$U_1$ just by replacing every gate with its controlled version. In practice, you won't need every qubit to be controlled, but that is guaranteed to work.

0
Should a Pauli $X$ matrix equal the identity matrix to be unitary?
4
How to decompose this two-qubit unitary matrix to the standard gate set?
4
Non-unitary matrix decomposition as a sum of unitary matrices
7
Constructing a circuit for $C^1(U)$ for rotation operators with TWO single qubit gates and CNOT gate
2
Deriving a controlled Kraus operator from an uncontrolled Kraus operator
0
What is the effect of the reset gate on the matrix form of a gate/circuit?
0
How is the P function applied in QSVT for the case of Hamiltonian simulation if it only modifies singular values?
2
How to calculate a matrix difference in a quantum circuit in the form $A - BAB$