How do we know that a superconducting circuit is a quantum system?

In introductions to superconducting qubits, we often take the classical LC circuit and then quantize the operators. Why are we allowed to do this?

The idea is to realise that classical physics is a limiting case of quantum physics. The limits (usually) are:

There are various other ways to think about it, but these are sufficient.

Now, the case of a transmon circuit being a quantum system comes from the low temperatures at which it is operated $(\approx 100 mK)$.

The energy level diagram of a transmon looks like this: 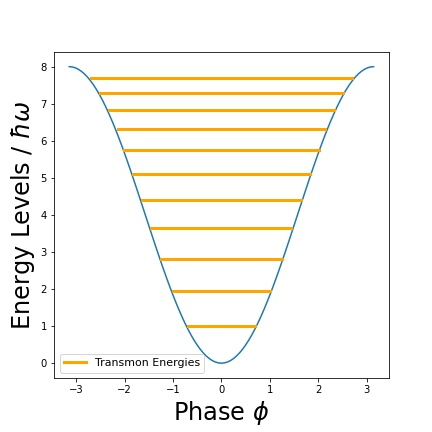 Now, as the energy $(E \propto kT)$ increases, the energy levels become too close by that they form an effective continuum. Thus as the energy/DoF increases, the system becomes closer to classical physics. There are no discrete energy levels in the continuum spectrum, and thus the 'quantum' nature of the circuit subsides. These ideas also apply to other quantum systems in general. You may refer to concepts such as the equipartition theorem to better understand how energy and DoF are related.

A simple way to understand this idea in terms of some numbers, at room temperature $(300 K)$, the thermal energy is $\approx 26 meV$ whereas the qubit energy of is $\approx 3 \mu eV$. Thus, all the low lying energy states are filled at room temperature and can't be used to process quantum information. (A qubit in the ground state can spontaneously excite to a higher level by absorbing energy from the environment)

On the other hand, at about $T = 30 mK$, the thermal energy is comparable to the qubit energy.

Not the answer you're looking for? Browse other questions tagged physical-realization physical-qubit superconducting-quantum-computing or ask your own question.