In a transmon qubit, what corresponds to the ground and excited states?

In a transmon qubit, we have ground and energy eigenstates but what is actually happening in the circuit here? How do the current and voltage look?

It looks like its made up of things you would find normally in a classical circuit so whats different here?

(if there is an easy-to-understand resource for transmon qubits, would appreciate any links)

The transmon is a slightly nonlinear $LC$ resonator, with a resonance frequency of a few GHz. The image below, from Bardin et al., IEEE Microwave Magazine, 2020 (of which I am an author), shows in the main panel three wavefunctions corresponding to the first three eigenstates of harmonic $LC$ oscillator (not a transmon, but close enough for the purpose of this question). The x-axis of this figure is the (normalized) flux through the inductor in the circuit, this is proportional to the current. The y-axis is "probability amplitude".

So what does this mean? The magnitude-squared of the wave function, $|\Psi(\Phi)|^2$ is the probability that the flux in the inductor will be $\Phi$ if measured.

You can see that in the ground state, the most likely value of the flux is $\Phi=0$, $\textit{i.e.}$, zero current. However, there is a finite probability to find that the flux (or current) is not zero even in the ground state - the $\Psi(\Phi)$ function has some width around $\Phi=0$. So for the harmonic oscillator (and the transmon) in the state $|0\rangle$, the current in the inductor fluctuates around zero.

The next wavefunction corresponds to the first excited state $|1\rangle$, and here we see that the most likely values for the flux are not zero, rather they are around $\pm1$ in the figure's units. In this state the oscillator has one quantum of energy, and you would be most likely to measure a finite current in the inductor.

So to answer the question directly, the current and voltage in the transmon (or flux and charge), if measured, would take on values drawn from a probability distribution determined by the state's wavefunction.

How is this different from a classical $LC$ circuit? The state of a classical oscillator is a coherent state, made up of a linear combination of wavefunctions like those shown in the figure. The coherent state has a well defined oscillation phase, where the current and voltage (of flux and charge) follow a sinusoidal time dependence. When the quantum harmonic oscillator (and the transmon) are in a particular state $|0\rangle$, $|1\rangle$, etc. there is a definite number of energy quanta in the circuit, but the phase of the oscillation is not well defined, all we have is the probability distributions for measuring particular values of the voltage or current. 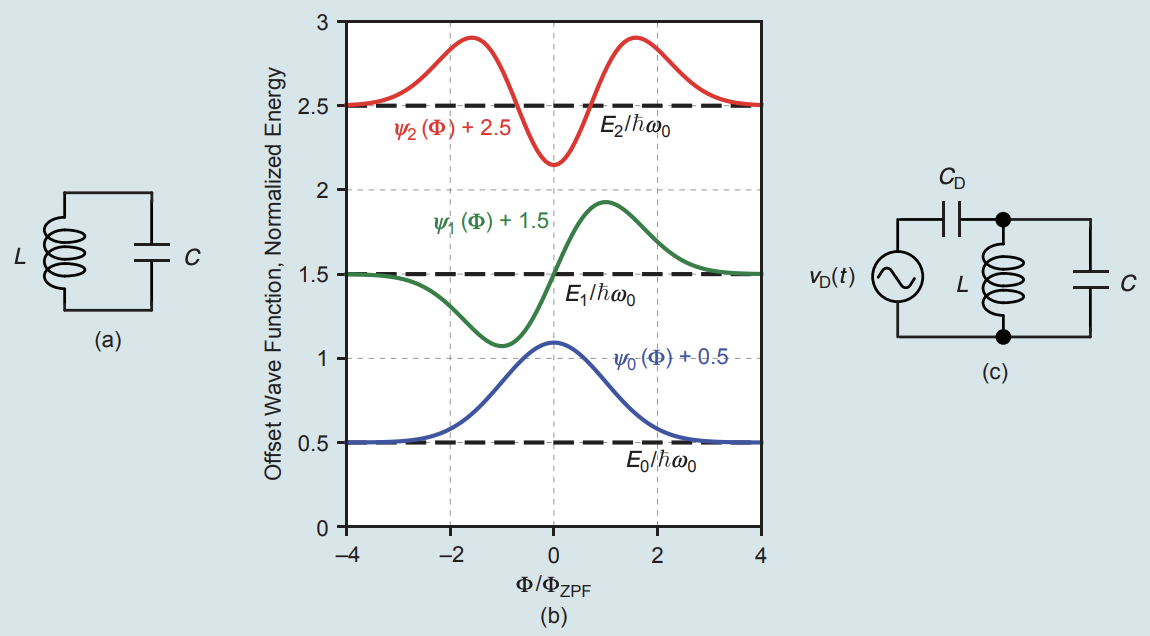 Not the answer you're looking for? Browse other questions tagged physical-realization physical-qubit superconducting-quantum-computing transmon or ask your own question.

22
What is the difference between transmon and Xmon qubits?
6
Transmons and cooper pair box qubits: two islands or a single island and a reservoir
5
Interaction of an RF pulse with transmon qubit
9
Is there an intuitive way to conceptualize the ground and excited states of a transmon qubit?
3
How are gates implemented in a transmon qubit?