The idea of a 4π rotation to return an electron to its original state instead of just a single 2π rotation exists - but can this idea apply to qubits or entangled qubits? 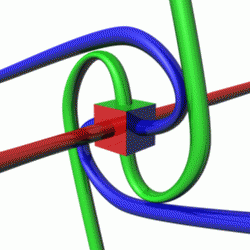 Even though $-I$ doesn't affect the state of a qubit, the controlled version Control-($-I$) is not the same as Control-($I$), which is still the identity.

Not the answer you're looking for? Browse other questions tagged quantum-gate entanglement spintronics or ask your own question.

4
Why can't a fanout be made with a CNOT gate?
5
In what ways can qubits be used for applications that do not require entanglement?
1
Can I generate 4 entangled states (each 5 qubits) on a 5 qubit quantum computer?
3
Can we understand multi-qubit gates in terms of rotation groups?
9
How can one imagine entanglement in a non-mathematical way?
3
How does a rotation about the y-axis on a Bloch sphere affect the state of a qubit?
4
Are these two 'divided by two' terms related?
2
Why can no pair of single qubits look like $\frac{1}{\sqrt2}(|00\rangle+|11\rangle$)?