Is Toffoli a fault tolerant transversal gate of the repetition code on bit-flip-error-only qubits?

Suppose you have physical qubits that only have bit flip noise (no phase flip noise, no unwanted measurements, no leakage, no amplitude decay, etc; just unwanted X rotations). Such qubits can be kept alive, protected from the bit flip noise, using just the repetition code. And you are doing so.

A transversal Toffoli between logical qubits A, B, C works by applying physical Toffoli gates pairwise (tripletwise?) across the physical qubits making up A, B, and C.

The rep code transversal Toffoli is not fault tolerant in this context. For example, here is a circuit which encodes 3 qubits $|+\rangle|0\rangle|0\rangle$ into separate distance 3 rep codes, then applies the transversal Toffoli with one X error, then decodes. Note that by the end the $|+\rangle$ qubit's state has been destroyed. Specifically it was unintentionally measured by the decoding process, causing it to decay to the center of the Bloch sphere: 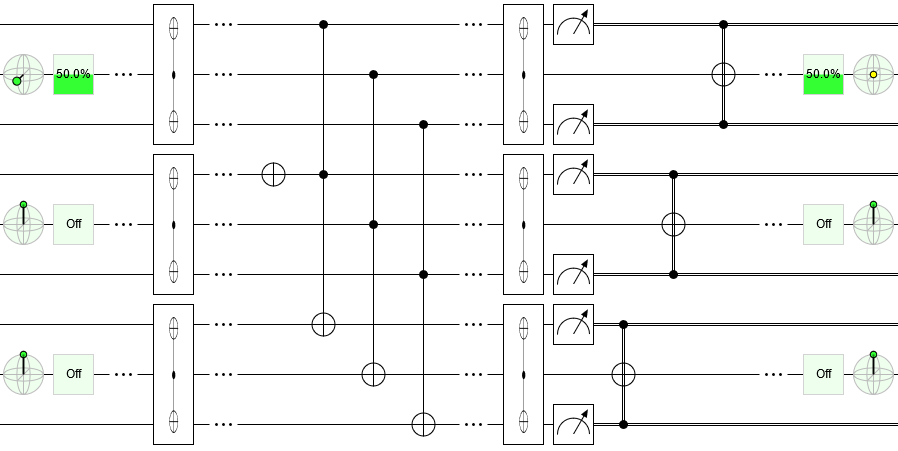 A potential point of confusion here is that, normally, transversal gates are trivially fault tolerant. But that assumes we're using a "proper" quantum error correcting code that protects against both X and Z errors, which is not the case here. The rep code is protecting against X error, but it is vulnerable to Z error. Unfortunately, the Toffoli gate can turn X error into Z error. An $X_1$ error before $\text{Toffoli}_{1,2,3}$ is equivalent to a $X_1 \cdot \text{CNOT}_{2,3}$ error afterward. The Pauli sum decomposition of the CNOT error includes Z Pauli terms, and these terms are not corrected by the code.

Another potential point of confusion is that classically the rep code transversal Toffoli is fault tolerant. But that's only because the uncorrected Z errors are irrelevant classically.

Yet another potential point of confusion is that the transversal CNOT is fault tolerant in this context, so why shouldn't the Toffoli be? But note that $X_1$ before $\text{CNOT}_{1,2}$ is equivalent to $X_1 \cdot X_2$ after. In the Toffoli case an X error on the control propagated into an error that had Z terms in its decomposition, but in the CNOT case it propagates into an error that still only has X terms. Everything ends up working out because the CNOT "preserves noise bias" (X begets X, Z begets Z, but never do they cross). The Toffoli doesn't preserve noise bias.

Not the answer you're looking for? Browse other questions tagged quantum-gate error-correction or ask your own question.

7
Shor code: phase flip error
2
Where (in the algorithm) is the logical qubit encoded in Q.E.C?
6
Error syndromes and recovery procedure in bit flip code
7
2 ways to do the three qubits bit-flip code
3
Quantum error correction using bit-flip code for the amplitude damping channel
3
In the three-qubit bit flip code, why can the first bit flip without impacting the entanglement with the other qubits?
0
Circuit for fault tolerant syndrome measurements Steane Code
6
Magic state distillation: why is it harder to prepare the encoded $|A_{\pi/4}\rangle$ than $|0 \rangle$
5
Does the Eastin-Knill theorem hold for repetition codes?