after reading the chapter of QPE (Quantum phase estimation) in Nielsen, I wanted to try an implementation in Quirk. My idea was to apply the T-gate, from which I know the following relation $T|1\rangle = e^{\frac{i\pi}{4}}|1\rangle$ so I expect as output of the phase $\theta = 1/8$, because $T|1\rangle = e^{2i\pi\theta}|1\rangle$.

In Nielsen, I followed the following diagram to construct "my approach" later in Quirk, followed by the inverse QFT applied to the first register, which is not shown in this picture:

Using the diagram from Nielsen together with the inverse QFT, I thus constructed the first part in Quirk as follows:

I remembered that a swap gate was needed to get the desired output at the end. In the QFT part in Nielsen, for example, this was the case (It was mentioned but not depicted in the circuit diagram). Thats why I decided to put this in the circuit after applying the controlled gates.

I now have this question:

Is the circuit really correct as I have built it? Background: In qiskit the circuit is built "descending" with T-gates and without the swap gate, while I have followed Nielsen and put the T-gates "ascending" in the circuit and then use the swap gate.

I hope my question is understandable so far. Thanks a lot for any upcoming answers/help.

Quirk uses the convention that the top qubit is the least significant qubit. When Quirk shows the ket $|001\rangle$, the rightmost bit (the 1) is the top qubit line and the equivalent decimal value is 1 (instead of 4). This is the opposite of the convention in Nielsen and Chuang.

Basically this means that, in Quirk, it's the top qubit that should control the single T gate (instead of the bottom qubit). 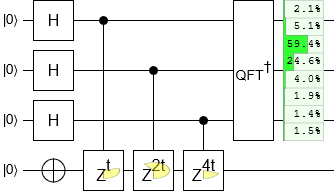 Not the answer you're looking for? Browse other questions tagged quantum-gate algorithm phase-estimation quirk or ask your own question.

13
Quantum algorithm for linear systems of equations (HHL09): Step 1 - Confusion regarding the usage of phase estimation algorithm
20
Why does the "Phase Kickback" mechanism work in the Quantum phase estimation algorithm?
1
Why are these circuits not producing the same output?
1
Is it possible to demonstrate a quadratic speed-up of a quantum algorithm on a classical computer?
4
Exercise 4.41 in N&C book QCQI: how can i implement $R_z(\theta)$ using the circuit shown and $Z$?
1
How to implement *nested* Grover search (in Quirk)?
4
What is wrong with my circuit for the fourth-root of $X$?