Magic state distillation: why is it harder to prepare the encoded $|A_{\pi/4}\rangle$ than $|0 \rangle$

My question is the following

Let's assume I am using Steane concatenated code to do error correction. This code admits transversal Clifford operations but not the $T$-gate.

In order to implement this gate one method is to prepare an ancilla in a state:

and to then use quantum teleportation to implement the $T$ gate on the logical data qubit.

The preparation of such state will usually fail with a high probability and to increase its probability of success we use the so called magic state distillation procedure.

Taking a step back I am not sure to understand why preparing $|A_{\pi/4}\rangle$ is more complicated than to prepare the logical $|0\rangle$ for Steane code for instance. Indeed in both case I need to make different qubits within the same codeblock interact. And we need a lot of $|0\rangle$ to prepare for the ancilla used in error correction.

As suggested in the answer, it might be easier to prepare the logical $|0_L\rangle$ and $|+_L\rangle$ because they can be prepared by measuring the stabilizers. However it requires additional ancilla qubits to do those measurements. And those ancilla must be prepared in the $|0_L\rangle$ or $|+_L\rangle$, so you would need other ancilla already initialized etc... So I am not sure to see how to implement this method "in practice".

This is why they are usually prepared with this circuit (taken from page 33 of this paper). Here it is the preparation of the logical $|0_L\rangle$. 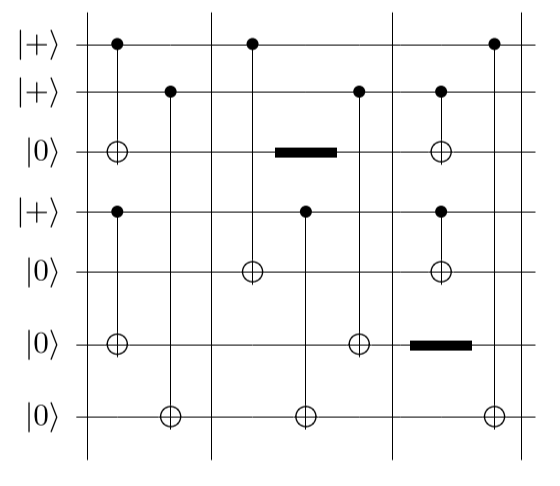 We see from this image that the physical qubits composing the logical one are interacting between each other (which then lead to error propagation). Because of that this process has a "high" probability to fail. Thus we repeat the procedure until it succeeds (there is a full way to check if the ancilla have been correctly prepared in a fault-tolerant manner that I won't explain here but it exists).

Why would it be much more complicated to prepare $|A_{\pi/4}\rangle$. Do we really need "intrinsically" much more gates ? Is there a fundamental reason why ?

The point is the logical $|0\rangle$ and $|+\rangle$ are (relatively) easy to prepare. You start with any bunch of qubits, it doesn't matter what state. You simply measure the stabilizers of the code and one of the logical operators. Whatever answers you get, you can correct for the outcomes.

The same logic works for the $|+_L\rangle$ state, initializing data qubits into $|+\rangle$, and thereby knowing the X type stabilizers so you can detect any errors right from the start.

But initializing all the data qubits into $|i\rangle$ is not a fault tolerant way to prepare $|i_L\rangle$, even though $|i\rangle$ is a stabilizer state, because that initialization tells you none of the stabilizers' initial values. So you have no way of telling if there were errors affecting the logical observable between the initialization and the first round of stabilizer measurements. And actually, because $|i_L\rangle$ is vulnerable to both X and Z type logical errors, it needs all stabilizers to be deterministic instead of just the X types or the Z types. So it's even starting with a vulnerability penalty (in the context of a CSS code).

The same is true of the $|T\rangle = T|+\rangle$ state. Initializing all the data qubits into $|T\rangle$ randomizes all the stabilizers, so there's no foothold. In order for an initialization to be fault tolerant, it has to make deterministic all the stabilizers relevant to protecting that state. Otherwise you have no way of checking if an error happened between initialization and the first round of measurements. And the "easy" strategy of transversally initializing just doesn't work for non-trivial states like $|T\rangle = T|+\rangle$.

It's not that this is literally impossible. There are codes with fault tolerant T state initialization. It's just that the most obvious thing, transversal initialization in a CSS code, only works for $|0\rangle$ and $|+\rangle$.

Not the answer you're looking for? Browse other questions tagged error-correction fault-tolerance magic-states or ask your own question.

16
How does magic state distillation overhead scale compare to quantum advantages?
15
Why do error correction protocols only work when the error rates are already significantly low to begin with?
3
In error correction code why don't we imitate the Hamming code instead of the complicated Steane code?
7
2 ways to do the three qubits bit-flip code
3
Why should we measure in X/Z basis for Z/X errors in Steane syndrome extraction?
5
How to create the logical $|0_L\rangle$ state for the Steane's 7-qubit code?
4
Transversal logical gate for Stabilizer (or at least Steane code)
3
Accuracy threshold theorem: what is the physical probability of failure exactly
1
Pros/cons of the different schemes to have complete fault-tolerant gatesets