I want to encode two vectors into qubits and compute a distance between them that corresponds/is proportional to the euclidian distance of the real vectors.

The encoding I use is

The distance metric I use is given by the overlap from

The problem I have (with any combination of A), B) I), II)) is that $|u\rangle$ and $|v\rangle$ have an overlap of 1, so are equivalent. The reason is that the encoding of $v$ is equal to the encoding of $u$, just with a global phase added,

s.t. the fidelity (as computed by qiskit) for example is

What encoding can I use that will produce distinct qubits for positive and negative real inputs?

I finally used the statepreparation described here For real vectors in the range $[-1,1]$ I obtain quantum distances corresponding to euclidian distances: 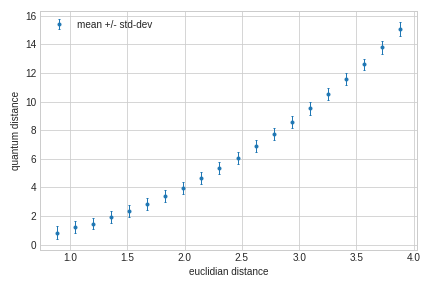 In the case where your vectors are real, I believe this gives the same inner product as the original vector, up to the effect of the normalisation factor.

Not the answer you're looking for? Browse other questions tagged qiskit fidelity swap-test or ask your own question.

9
Quantum algorithm for linear systems of equations (HHL09): Step 2 - Preparation of the initial states $|\Psi_0\rangle$ and $|b\rangle$
5
Entanglement state preparation by using amplitude values
2
Pauli I in eoh procedure doesn't become a global phase gate in qiskit evolution_instruction method. Possible consequences
5
What is a difference between error rates and qubit/gate fidelity?
1
Why do I get positive amplitudes when I create a qiskit StateVectorCircuit from only negative amplitudes?
2
Why is declared that $0 \le \theta \le \pi$ for Qiskit's U3 gate?
5
How to find the distance between a given $\rho$ and the nearest pure state(s)?
1
How to know positive or negative phrase from qshere diagram?
9
Approximate Cloning
2
Different statevectors with different quantity of complex numbers for same single-qubit states in Qiskit