Is there some nice physical intuition to get for quantum teleportation

I know the quantum teleportation protocol: using an EPR pair you can "teleport" the data of one qubit on one of the qubit composing the EPR pair by doing appropriate measurement in the Bell basis between one of the EPR pair qubit and the qubit you want to transfer (and you have to do some "feedback" operation depending on the measurement outcome).

I agree with the calculation but the way I understand the protocol is just from a "shut up and calculate" point of view. I have no intuition about why it works outside of pure brute force calculation and I wondered if there is some physical intuition to get there.

For instance how people had this idea initially?

In a certain sense, local measurements of entangled states already can be viewed as a kind of "teleportation".

Now, if Alice wants to "teleport" $|\phi\rangle$ she measures her qubit in the $|\phi\rangle,|\psi\rangle$ basis. Half of the time the result will be "$\phi$", and she can send a single classical bit indicating the success. In the successful case Bob's local state will also be $|\phi\rangle$.

For circuit identities, you start with a swap and then just keep doing obviously correct things like "CZ = CNOT with target conjugated by hadamards" until you get to teleportation.

For the ZX calculus, the proof is almost laughably trivial. All you do is draw a squiggly line, then a line, and put an equals sign between them. All the hard work was already done in setting up the machinery of the diagrams in the first place.

If you want to be a little more rigorous and properly model the Pauli corrections, instead of assuming they can just be dealt with, you end up showing that the following graph equals the two-lines graph under the ZX rewrite rules (from https://members.loria.fr/VZamdzhiev/slides/quilt.pdf ): 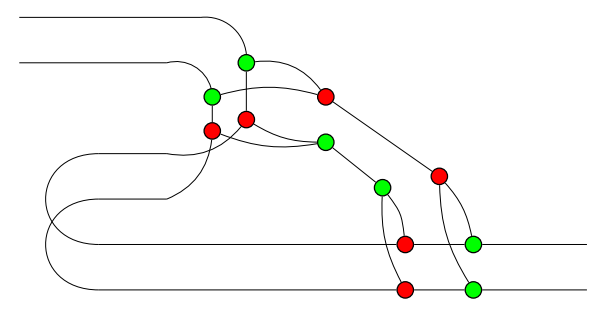 I will try to give a high level interpretation of what is going on during Quantum Teleportation.

We first begin with Alice and Bob each holding 1 bit from a Bell State, otherwise known as a maximally entangled state. At a high level we can think of the entanglement "connecting" the two bits of information and correspondingly the information possessed by Alice and Bob.

If Alice wishes to communicate another bit of information to Bob what is a strategy she may use? Well she could just walk over with the bit, or send it as a quantum signal on a conducting line, but these have the difficulty of requiring quantum communication; using entanglement we can devise a better strategy to communicate the state from Alice to Bob.

Again at a high level, Alice can first entangle her bit to the bit she has of the shared Bell state between herself and Bob; which now creates 3 entangled quantum bits. In many ways the information is already "connected" to Bob, however we still need a way to make that information readable to Bob. If after the entanglement Alice measures her 2 bits; then the bit in Bob's possession will collapse to a single qubit (can be calculated through partial traces easily).

Here we get into the specifics of the protocol, but as your question suggests you have already gone through the "calculations". By sending her measurements as classical bits to Bob, Alice enables Bob to perform rotations on his state and obtain after the rotations the original state held by Alice. I won't explain why/how this works, you can investigate further for yourself.

Not the answer you're looking for? Browse other questions tagged teleportation or ask your own question.