I am interested to have references and comment about pro/cons of the various methods that are used to implement complete gateset in a fault tolerant manner.

Usually the Clifford operations have a standard way to be implemented fault-tolerantly, at least in concatenated code (which I know best), by implementing them transversally. But it has been shown that it is not possible to have a complete gateset only based on transversal gates implementation. For this reason, for the non-clifford operations, other techniques are usually required. There is for what I know:

In the answer, I would be interested to know why magic state distillation is so popular those days, given the number of publications in this topic (because there are many other techniques). There is probably some clear advantage over other techniques that I don't see.

Michael Beverland et al looked at the cost of code switching and found "[no] substantial savings over state distillation" despite using more complex connectivity (a 3d code instead of a 2d code for the code switching).

Caution: you should ignore the orange curves because there's no corresponding "optimistic state distillation" to compare it to. 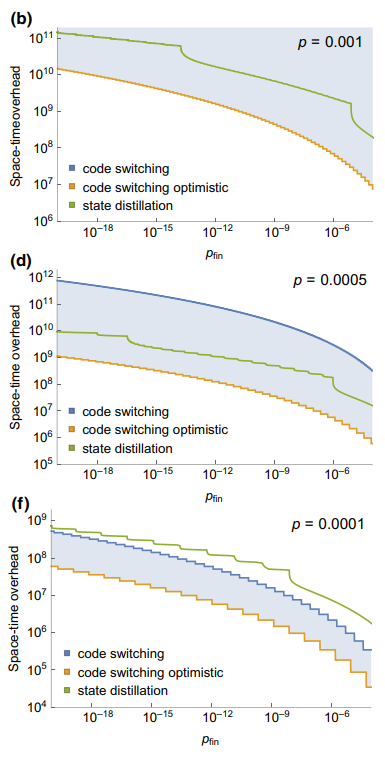 (The 2d surface code has transversal Clifford gates when you can stack interacting layers, so you would expect state distillation cost to drop if you had access to a 3d topology.)

Not the answer you're looking for? Browse other questions tagged error-correction resource-request fault-tolerance magic-states or ask your own question.

12
Significance of Clifford operations from quantum error correction perspective
5
Magic State Distillation Understanding Check
9
Is there a good reason to use T-count minimization for circuits executed on current IBM open quantum systems (real hardware)?
6
Good references to learn magic state distillation for fault tolerance
8
Magic state distillation: why is it harder to prepare the encoded $|A_{\pi/4}\rangle$ than $|0 \rangle$
3
State of the art logical gate implementations for surface code
5
Algorithm resource estimation: why "usually" only the $T$ gate count is being provided. When the Clifford count is provided, does that include Id gate
2
Magic state distillation with the 15 qubit code. Why is the failure $O(p^2)$ if we include $|+_L\rangle$ preparation and decoding?
3
Magic state distillation with the $15$ qubit code. How are the transversal $T$ performed? Also via a (lower level) state injection?
4
What are the transversal gates of Shor's [[9,1,3]] code?