What is the "surface code" in the context of quantum error correction?

I am studying Quantum Computing and Information, and have come across the term "surface code", but I can't find a brief explanation of what it is and how it works. Hopefully you guys can help me with this.

The surface codes are a family of quantum error correcting codes defined on a 2D lattice of qubits. Each code within this family has stabilizers that are defined equivalently in the bulk, but differ from one another in their boundary conditions.

The surface codes are currently a large research area, so I’ll just point you towards some good entry points (in addition to the Wikipedia article linked to above).

The surface codes can also be generalized to qudits. For more on that, see here.

The terminology of 'surface code' is a little bit variable. It might refer to a whole class of things, variants of the Toric code on different lattices, or it might refer to the Planar code, the specific variant on a square lattice with open boundary conditions.

I'll summarise some of the basic properties of the Toric code. Imagine a square lattice with periodic boundary conditions, i.e. the top edge is joined to the bottom edge, and the left edge is joined to the right edge. If you try this with a sheet of paper, you'll find you get a doughnut shape, or torus. On this lattice, we place a qubit on each edge of a square. 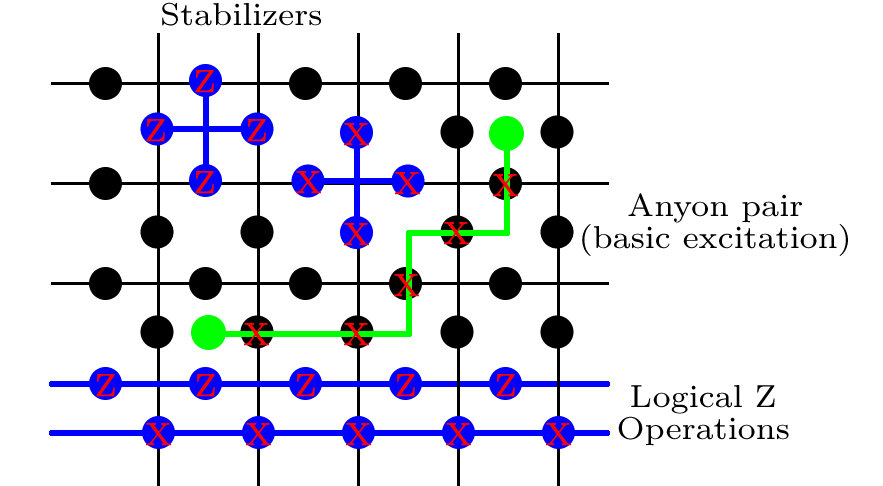 Next, we define a whole bunch of operators. For every square on the lattice (comprising 4 qubits in the middle of each edge), we write $$ B_p=XXXX, $$ acting a Pauli-$X$ rotation on each of the 4 qubits. The label $p$ refers to 'plaquette', and is just an index so we can later count over the whole set of plaquettes. On every vertex of the lattice (surrounded by 4 qubits), we define $$ A_s=ZZZZ. $$ $s$ refers to the star shape and again, will let us sum over all such terms.

We observe that all of these terms mutually commute. It's trivial for $[A_s,A_{s'}]=[B_p,B_{p'}]=0$ because Pauli operators commute with themselves and $\mathbb{I}$. More care is required with $[A_s,B_p]=0$, bot note that these two terms either have 0 or 2 sites in common, and pairs of different Pauli operators commute, $[XX,ZZ]=0$.

For an $N\times N$ lattice, there are $N^2$ qubits, so the Hilbert space dimension is $2^{N^2}$. There are $N^2$ terms $A_s$ or $B_p$, which we collectively refer to as stabilizers. Each has eigenvalues $\pm 1$ (to see, just note that $A_s^2=B_p^2=\mathbb{I}$) in equal number, and when we combine them, each halves the dimension of the Hilbert space, i.e. we would think that this uniquely defines a state.

Now, however, observe that $\prod_sA_s=\prod_pB_p=\mathbb{I}$: each qubit is included in two stars and two plaquettes. This means that one of the $A_s$ and one of the $B_p$ is linearly dependent on all the others, and does not further reduce the size of the Hilbert space. In other words, the stabilizer relations define a Hilbert space of dimension 4; the code can encode two qubits.

There's a couple of different conventions for how to label the different operators. I'll go with my favourite (which is probably the less popular):

You'll see that the operators that are supposed to anti-commute meet at exactly one site, with an $X$ and a $Z$.

The distance of the code is $N$ because the shortest sequence of single-qubit operators that converts between two logical states constitutes $N$ Pauli operators on a loop around the torus.

Once you have a code, with some qubits stored in the codespace, you want to keep it there. To achieve this, we need error correction. Each round of error correction comprises measuring the value of every stabilizer. Each $A_s$ and $B_p$ gives an answer $\pm 1$. This is your error syndrome. It is then up to you, depending on what error model you think applies to your system, to determine where you think the errors have occurred, and try to fix them. There's a lot of work going on into fast decoders that can perform this classical computation as efficiently as possible.

One crucial feature of the Toric code is that you do not have to identify exactly where an error has occurred to perfectly correct it; the code is degenerate. The only relevant thing is that you get rid of the errors without implementing a logical gate. For example, the green line in the figure is one of the basic errors in the system, called an anyon pair. If the sequence of $X$ rotations depicted had been enacted, then the stabilizers on the two squares with the green blobs in would have given a $-1$ answer, while all others give $+1$. To correct this, we could apply $X$ along exactly the path where the errors happened, although our error syndrome certainly doesn't give us the path information. There are many other paths of $X$ errors that would give the same syndrome. We can implement any of these, and there are two options. Either, the overall sequence of $X$ rotations forms a trivial path, or one that loops around the torus in at least on direction. If it's a trivial path (i.e. one that forms a closed path that does not loop around the torus), then we have successfully corrected the error. This is at the heart of the topological nature of the code; many paths are equivalent, and it all comes down to whether or not these loops around the torus have been completed.

While the distance of the code is $N$, it is not the case that every combination of $N$ errors causes a logical error. Indeed, the vast majority of $N$ errors can be corrected. It is only once the errors become of much higher density that error correction fails. There are interesting proofs that make connections to phase transitions or the random bond Ising model, that are very good at pinning down when that is. For example, if you take an error model where $X$ and $Z$ errors occur independently at random on each qubit with probability $p$, the threshold is about $p=0.11$, i.e. $11\%$. It also has a finite fault-tolerant threshold (where you allow for faulty measurements and corrections with some per-qubit error rate)

Details are largerly identical to the Toric code, except that the boundary conditions of the lattice are open instead of periodic. This means that, at the edges, the stabilizers get defined slightly differently. In this case, there is only one logical qubit in the code instead of two.

1
how are redundant stabilisers handled when measuring sydrome?

8
Why does the surface (quantum error correction) code have such a high threshold for errors?
6
Is the common depiction of a surface code to be taken literally as a real-space image of the actual hardware?
6
What is the quantum bandwidth of a planar array of noisy qubits, assuming free classical communication?
3
Understanding surface code diagrams
2
Is there benefit to extra stabilizers in a rotated surface code?
3
How to understand the circuits used for magic state distillation in surface code?
4
What is a "temporal" or "timelike" logical error in the surface code?
3
State of the art logical gate implementations for surface code